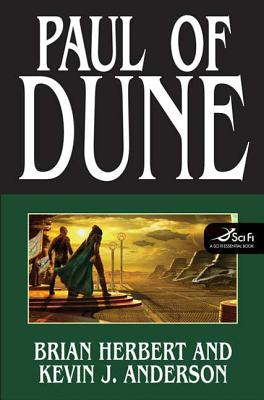 Frank Herbert's "Dune" ended with Paul Muad'Dib in control of the planet Dune. Herbert's next Dune book, "Dune Messiah," picked up the story several years later after Paul's armies had conquered the galaxy. But what happened between "Dune" and "Dune Messiah"? How did Paul create his empire and become the Messiah? Following in the footsteps of Frank Herbert, "New York Times" bestselling authors Brian Herbert and Kevin J. Anderson are answering these questions in "Paul of Dune."

And Paul himself begins to have doubts: Is the jihad getting out of his control? Has he created anarchy? Has he been betrayed by those he loves and trusts the most? And most of all, he wonders: "Am I going mad?"

"Paul of Dune" is a novel everyone will want to read and no one will be able to forget.


Praise For Paul of Dune…

Praise for The Dune Saga

“This vital link between the first two books of the Dune saga begins immediately after the close of Dune…This is good reading….  Standing well enough on its own for Dune novices, it goes without saying that it’s must reading for established fans.”
--Booklist on Paul of Dune


“Drawing on Frank Herbert’s massive body of notes, the coauthors of the new Dune series continue their expansion and illumination of the unexplored pieces of one of the genre’s most significant and powerful stories. A priority purchase for libraries of all sizes. Highly recommended.”
--Library Journal (stared review) on Paul of Dune

"Dune addicts will happily devour Herbert and Anderson's spicy conclusion to their second prequel trilogy."
--Publishers Weekly on Dune: The Battle of Corrin

"Sit back and enjoy."
--Booklist on Dune: The Machine Crusade

"The kind of intricate plotting and philosophical musings that would make the elder Herbert proud."
--Publishers Weekly (starred review) on Dune: The Butlerian Jihad

Brian Herbert, the author of numerous novels and short stories, has been critically acclaimed by leading reviewers in the United States and around the world. The eldest son of science fiction superstar Frank Herbert, he, with Kevin J. Anderson, is the author of Hellhole and continues his father's beloved Dune series with books including The Winds of Dune, House Atreides, Sandworms of Dune, among other bestsellers. He also wrote a biography of his father, Dreamer of Dune. Herbert graduated from high school at age 16, and then attended U.C. Berkeley, where he earned a B.A. in Sociology. Besides an author, Herbert has been an editor, business manager, board game inventor, creative consultant for television and collectible card games, insurance agent, award-winning encyclopedia salesman, waiter, busboy, maid and a printer. He and his wife once owned a double-decker London bus, which they converted into an unusual gift shop. Herbert and his wife, Jan, have three daughters. They live in Washington state.