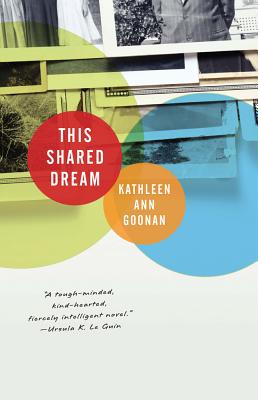 Kathleen Ann Goonan introduced Sam Dance and his wife, Bette, and their quest to alter our present reality for the better in her novel In War Times (winner of the John W. Campbell Memorial Award for Best Novel and ALA’s Best Science Fiction Novel of 2008). Now, in This Shared Dream, she tells the story of the next generation.

The three Dance kids, seemingly abandoned by both parents when they were younger, are now adults and are all disturbed by memories of a reality that existed in place of their world. The older girl, Jill, even remembers the disappearance of their mother while preventing the assassination of John F. Kennedy.

Goonan has created a new kind of utopian SF novel, in which the changes in history have created a present world that is in many ways superior to our own, while in other worlds people strive to prevent their own erasure by restoring the ills to ours. This Shared Dream is certainly the most provocative SF speculation of the year, and perhaps the decade.

Kathleen Ann Goonan won the John W. Campbell Award for her novel "In War Times." She lives in Tavernier, Florida.

Praise For This Shared Dream…

Praise for In War Times:

“While This Shared Dream is plenty exciting and expertly paced, there’s a quietness, a gentleness, throughout. Its characters talk far more than they act. They aren’t just action figures; they’re real people, damaged yet striving, and we come to care deeply about them. Such is the power of art — the real, not imaginary, empathy-creating device. Living up to its title, “This Shared Dream” is ultimately a novel about connectedness, in every sense, and the possibility of greater harmony in what used to be called the family of man. Little wonder that Goonan’s overarching metaphor for earthly felicity is improvisational jazz, the true music of the spheres.”
— The Washington Post
“A complex…thoughtful and often dazzling journey through worlds that might, and perhaps should, have been.”
—Kirkus Reviews, starred review

“[Goonan] can take all the credit for a narrative that has hardly a single flaw of pacing, setting, or characterization, and will be intelligible, not to say fascinating, to readers far beyond the ranks of World War II buffs. An authentic classic.”
—Booklist, starred review
or
Not Currently Available for Direct Purchase
Copyright © 2020 American Booksellers Association