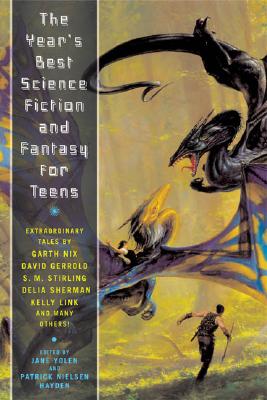 The Year's Best Science Fiction and Fantasy for Teens

Award-winning anthologists Jane Yolen and Patrick Nielsen Hayden have combed through a year's worth of books and magazines and websites to find the most outstanding fantasy and science fiction stories of 2004--and collected them into a single volume aimed specifically at teens and young adults.

Many of today's most popular authors are represented here, including:
* Garth Nix, author of Sabriel, Lirael, and Abhorsen, who presents an unforgettable tale of two swords, two daughters, and two endings....
* S. M. Stirling, author of Island in the Sea of Time, sends a likeable young barbarian across the Channel to Alba, for a confrontation with a wizard from faraway Nantucket that will change his life forever...
* David Gerrold, creator of "The Trouble with Tribbles," who takes you to a remote countryside surrounded by a mysterious darkness, whose secret has yet to be revealed...

JANE YOLEN is one of our most prolific and gifted authors with over 250 books to her credit. Among the many awards she has won are: two Nebula Awards, two Christopher Medals, the World Fantasy Award, three Mythopoeic Fantasy Awards, the Golden Kite Award, and the Jewish Book Award.

PATRICK NIELSEN HAYDEN, winner of the World Fantasy Award for Best Anthology for Starlight 1, has been called "one of the most literate and historically aware editors in science fiction" by The Washington Post. His two recent young adult anthologies, New Magics and New Skies, have garnered stellar reviews.
Loading...
or
Not Currently Available for Direct Purchase