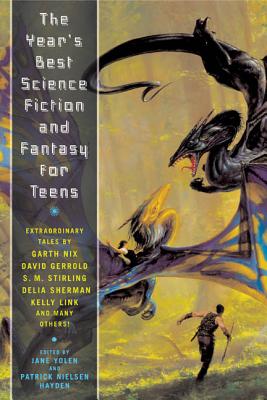 The Year's Best Science Fiction and Fantasy for Teens

Award-winning anthologists Jane Yolen and Patrick Nielsen Hayden have combed through a year's worth of books and magazines and websites to find the most outstanding fantasy and science fiction stories of 2004--and collected them into a single volume aimed specifically at teens and young adults.

Many of today's most popular authors are represented here, including:
* Garth Nix, author of Sabriel, Lirael, and Abhorsen, who presents an unforgettable tale of two swords, two daughters, and two endings....
* S. M. Stirling, author of Island in the Sea of Time, sends a likeable young barbarian across the Channel to Alba, for a confrontation with a wizard from faraway Nantucket that will change his life forever...
* David Gerrold, creator of "The Trouble with Tribbles," who takes you to a remote countryside surrounded by a mysterious darkness, whose secret has yet to be revealed...

"The stories in this anthology range from good to brilliant to jaw-dropping." - Cory Doctorow

"The selection of stories is excellent, providing a wonderful sampling of a wide range of fiction aimed (directly or indirectly) at a YA audience and here’s plenty to please here... I’m already looking forward to next year." - The Chronicle

Patrick Nielsen Hayden, called by the Washington Post "one of the most literate and historically aware editors in science fiction," is the winner of three Hugo Awards and the World Fantasy Award for his editorial work?. He is the editor or co-editor of several original and reprint anthologies, including the Starlight series and the young adult anthologies New Magics and New Skies.
?As an editor at Tor Books for over 25 years, he is responsible for publishing the debut novels of many of the field's best writers, including Maureen F. McHugh, Susan Palwick, Cory Doctorow, Jo Walton, and John Scalzi.