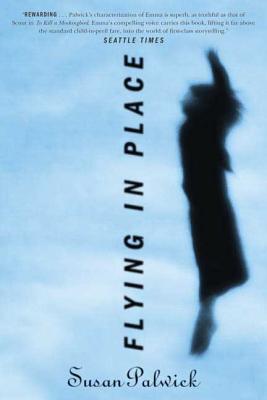 Once in a while, a first novel arrives like a bolt of lightning, commanding attention with an explosion of power, grace, and light. Flying in Place is such a book. As unflinching as The Lovely Bones, as startling as Beloved, it is a work to bear witness--with bravery and compassion--for the experience of millions of readers and their loved ones.
Emma is twelve, a perfectly normal girl, in a perfectly normal home. With a perfectly normal father...who comes into her bedroom every night in the hours before dawn. Emma will do anything to escape. From the visits. From the bodies. From the breathing. Even go walking on the ceiling--which is where Emma meets Ginny, the sister who died before she was born. Ginny, who knows things. Ginny, who can fly....


Praise For Flying in Place…

“Packs a huge emotional wallop...Flying in Place is a brave and honest work, an impressive and important debut.” —San Francisco Examiner on Flying in Place

“Rewarding...Palwick's characterization of Emma is superb, as truthful as that of Scout in To Kill a Mockingbird. Emma's compelling voice carries this book into the world of first-class storytelling.” —Seattle Times on Flying in Place

“A powerful and harrowing story about child abuse...Dramatizes its horrific theme with unflinching clarity and great dramatic power.” —New York Newsday on Flying in Place

“Simple, strong, and very powerful...a true page-turner...A book so achingly true you want to thank the author. A book like this, a story that can captivate us and raise our awareness, tells truths that need to be told.” —Raleigh News & Observer on Flying in Place

“The trauma of sexual abuse is described with beautiful, almost lyrical writing...The moving and compelling writing is sustained as the revelations unfold.” —Library Journal on Flying in Place