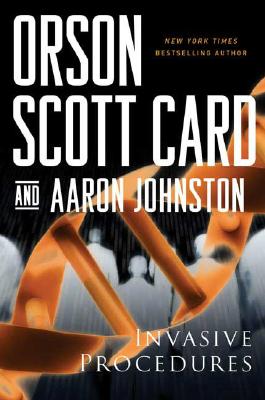 George Galen is a brilliant scientist, a pioneer in gene therapy. But Galen is dangerously insane - he has created a method to alter human DNA, not just to heal diseases, but to "improve" people - make them stronger, make them able to heal more quickly, and make them compliant to his will.
Frank Hartman is also a brilliant virologist, working for the government's ultra-secret bio-hazard agency. He has discovered how to neutralize Galen's DNA-changing virus, making him the one man who stands in the way of Galen's plan to "improve" the entire human race.
This taut thriller takes the reader a few years into the future, and shows the promise and danger of new genetic medicine techniques.

"[Empire is a] relentless thriller, which couldn't be timelier and is, for all its hyperactivity and flip, Hollywoodish one-liners, heartfelt and sobering. ...there are many deftly shaped supporting players, and major shocks explode in a split second (no Stephen King slo-mo for Card!). Moreover, all the action doesn't obscure the author's message about the dangers of extreme political polarization and the need to reassert moderation and mutual citizenship; indeed, it drives it home." --Booklist "[A] blistering read. Card plots hard-boiled action just as well as Tom Clancy, and layers in character detail and dialogue you'll never find in a Jack Ryan novel." --Entertainment Weekly on Empire

Orson Scott Card is the bestselling author of "Ender's Game." Aaron Johnston is a successful Hollywood screenwriter. The book is loosely based on an old short story of Card's, "Malpractice."
Loading...
or
Not Currently Available for Direct Purchase