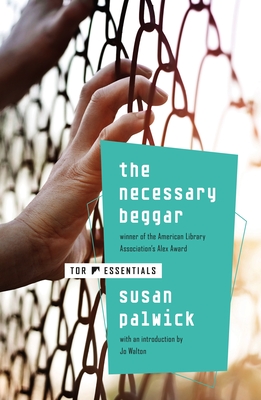 The great modern SF novel of the immigrant experience, as timely today as it was on its first publication, Susan Palwick's The Necessary Beggar.

Lemabantunk, the Glorious City, is a place of peace and plenty, bejeweled streets and glittering waterfalls. It is also a place of severe justice. Darroti, a young merchant, has been accused of the brutal murder of a highborn woman. Now, in keeping with his world's customs, his entire family must share in his punishment: exile to the unknown world that lies beyond a mysterious gate.

Passing through the gate, and grieving for the life they left behind, Darroti and his family find themselves in a harsh and hostile land: America just a few years hence. Unable to explain their origin, they're rapidly remanded to a desert internment camp along with thousands of other refugees. There they struggle to make sense of this ill-fated new world and its strange gods. They will eventually make their way out of the camp—and each of them will adapt, or fail to adapt, to their new lives according to their natures. And learn, or fail to learn, what actually happened back in Lemabantunk . . .

This new Tor Essentials edition of The Necessary Beggar includes an introduction by Jo Walton, Hugo, Nebula, and World Fantasy Award-winning author of Among Others.

“Triumphant…Succeeds as a heart-wrenching romance, a sharp meditation on refugees and
displaced persons, and a tragicomedy of cultural differences. Outstanding.” —Publishers Weekly (starred review)