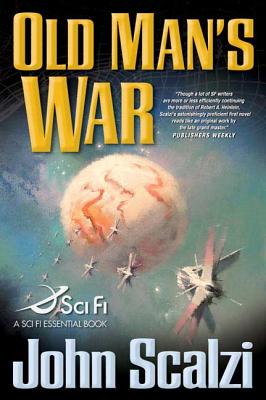 Perfect for an entry-level sci-fi reader and the ideal addition to a veteran fan’s collection, John Scalzi's Old Man’s War will take audiences on a heart-stopping adventure into the far corners of the universe.

“Though a lot of SF writers are more or less efficiently continuing the tradition of Robert A. Heinlein, Scalzi's astonishingly proficient first novel reads like an original work by the late grand master...This virtuoso debut pays tribute to SF's past while showing that well-worn tropes still can have real zip when they're approached with ingenuity.” —Publishers Weekly (starred review)

“Gripping and surpassingly original. It's Starship Troopers without the lectures. It's The Forever War with better sex. It's funny, it's sad, and it's true.” —Cory Doctorow

“I enjoyed Old Man's War immensely. A space war story with fast action, vivid characters, moral complexity and cool speculative physics, set in a future you almost want to live into, and a universe you sincerely hope you don't live in already.” —Ken MacLeod