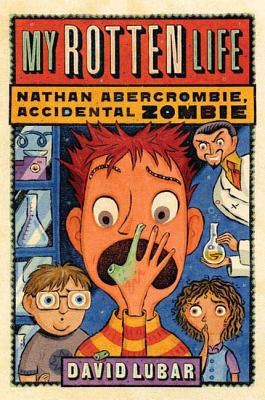 “After Abigail overhears Nathan and Mookie talking about their lousy day at school, she suggests they visit her uncle, who has concocted a secret formula that helps neutralize feelings. But due to the use of a wrong ingredient, Nathan begins to transform into a zombie! Master writer David Lubar effectively tempers sensitive topics with laugh-out-loud moments in this first of a series.”
— Tish Gayle, The Blue Marble, Fort Thomas, KY
View the List

Ten-year-old Nathan Abercrombie is having a really bad day. First, Shawna Lanchester, the prettiest girl in his class, doesn't invite him to her party. Then he gets picked last in gym class. Things couldn't get any worse…until he gets doused with an experimental serum that turns him into a half-dead zombie!

Nathan soon discovers that being half dead isn't all bad. He doesn't need any sleep, so he can stay up all night and play games online. He doesn't feel any pain, so there's no need to worry about Rodney the bully anymore. Still, Nathan would rather be human. Will he find a cure? Or will Nathan be half-dead forever?

“Being dead has never been cooler. Go Nathan Abercrombie! You're a zombie for the 21st century.” —Gordon Korman, author of 39 Clues: One False Note and No More Dead Dogs

“My Rotten Life stinks--but that's only when Nathan Abercrombie belches. The rest of the book is a delightful and disgusting story about friendship that will leave you in stitches.” —Lisa Yee, author of Millicent Min, Girl Genius

“If you like half dead zombie comedies, this is the book for you.” —Dan Gutman, author of Babe and Me