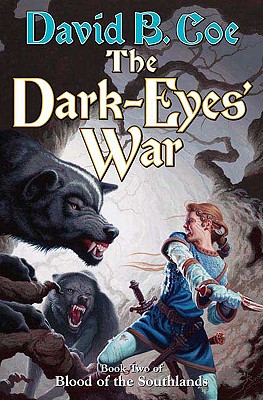 Book Three of Blood of the Southlands

A bitter old woman’s curse has set in motion events that have felled innocent lives across an already war-weary land. She has paid the ultimate price, and an end to the curse is at hand, but her evil has created chaos and destruction.

Qirsi all across the Southlands are dying from a plague that turns their own magic against them, allowing an Eandi army from Stelpana to boldly march into their territory. But magic has many faces, and the Qirsi aren’t the only ones cursed; even as Stelpana’s force wins battles, an insidious magic has corrupted the spells of their sorcerers, and what began as a military triumph is suddenly jeopardized. The future of the Southlands hangs in the balance, as the deeds of previous generations wreak terrible consequences on both sides in this misbegotten war.


Praise For The Dark-Eyes' War: Book Three of Blood of the Southlands…

"Fans of the series will enjoy cozying up with their favorite -- and least favorite -- occupants of the Southlands."--RT Book Reviews Praise for The Horsemens' Gambit:


“Coe steps up the tension and raises the stakes, leaving readers quivering in anticipation of book three.”--Publishers Weekly


"Coe manages to take several serious, weighty issues, approach them from distinctly different points of view and make you sympathetic toward characters who sometimes act selfishly or viciously.  He absolutely nails the plot and sequencing.  This book is the best yet in the series." --Romantic Times BOOKreviews

David B. Coe is the author of the Winds of the Forelands and Blood of the Southlands series. "Children of Amarid" and "The Outlanders," the first two novels of his LonTobyn Chronicle trilogy, won the William L. Crawford Award for Best First Fantasy or Fantasy Series. He also wrote the novelization of the Ridley Scott production of Robin Hood. Coe grew up in the suburbs around New York City. He received his undergrad degree from Brown University and his Ph.D. in history from Stanford University. In his free time, he is an avid birdwatcher and nature photographer. He lives with his wife and two daughters in Sewanee, Tennessee.
Loading...
or
Not Currently Available for Direct Purchase