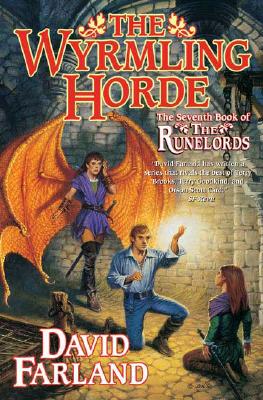 The Seventh Book of the Runelords

The Saga of the Runelords is written in the finest tradition of Tolkien and other works that rise above the fantasy genre to special and individual heights.

Now the epic story continues: at the end of Worldbinder, Fallion Orden, son of Gaborn, was imprisoned on a strange and fantastic world that he created by combining two alternate realities. It's a world brimming with dark magic, ruled by a creature of unrelenting evil who is gathering monstrous armies from a dozen planets in a bid to conquer the universe. Only Fallion has the power to mend the worlds, but at the heart of a city that is a vast prison, he lies in shackles. The forces of evil are growing and will soon rage across the heavens. Now, Fallion's allies must risk everything in an attempt to free him from the wyrmling horde.


Praise For The Wyrmling Horde: The Seventh Book of the Runelords…

“David Farland has written a series that rivals the best of Terry Brooks, Terry Goodkind and Orson Scott Card."
--SF Revu on Worldbinder


“Brings the saga’s conflicts to a resounding climax in a three-cornered confrontation. . . . The suspense is real, the action is nonstop, and the characterizations continue to convince. . . . [this is] a series that has put Farland on high-fantasy readers’ maps.”
--Booklist on The Lair of Bones


“Imaginative use of magic and detailed world-building. . . .  Fans of Robert Jordan and Terry Goodkind will enjoy Farland’s Runelords.”
--Romantic Times BOOKReviews on The Lair of Bones


“The Runelords is a first rate tale, an epic fantasy that more than delivers on its promise. Read it soon and treat yourself to an adventure you won’t forget.”
--Terry Brooks