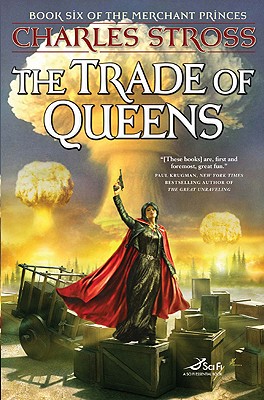 The Trade of Queens (Hardcover)

Book Six of the Merchant Princes

A dissident faction of the Clan, the alternate universe group of families that has traded covertly with our world for a century or more, have carried nuclear devices between the worlds and exploded them in Washington, DC, killing the President of the United States. Now they will exterminate the rest of the Clan and keep Miriam alive only long enough to bear her child, the heir to the throne of their land in the Gruinmarkt world.
The worst and deepest secret is now revealed: behind the horrifying plot is a faction of the US government itself, preparing for a political takeover in the aftermath of disaster. There is no safe place for Miriam and her Clan except, perhaps, in the third alternate world, New Britain--which has just had a revolution and a nuclear incident of its own.
Charles Stross's Merchant Princes series reaches a spectacular climax in this sixth volume. Praised by Nobel laureate Paul Krugman as "great fun," this is state of the art, cutting edge SF grown out of a fantastic premise.

Charles Stross is the author of the bestselling Merchant Princes series, the Laundry series, and several stand-alone novels including "Glasshouse," "Accelerando," and "Saturn's Children." Born in Leeds, England, in 1964, Stross studied in London and Bradford, earning degrees in pharmacy and computer science. Over the next decade and a half he worked as a pharmacist, a technical writer, a software engineer, and eventually as a prolific journalist covering the IT industry. His short fiction began attracting wide attention in the late 1990s; his first novel, "Singularity Sky," appeared in 2003. He has subsequently won the Hugo Award twice. He lives with his wife in Edinburgh, Scotland, in a flat that is slightly older than the state of Texas.
or
Not Currently Available for Direct Purchase
Copyright © 2020 American Booksellers Association