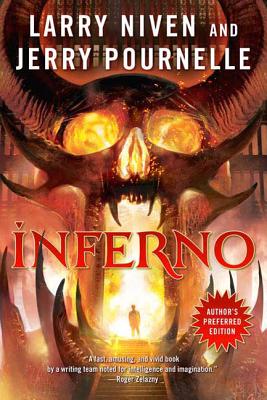 After being thrown out the window of his luxury apartment, science fiction writer Allen Carpentier wakes to find himself at the gates of hell. Feeling he's landed in a great opportunity for a book, he attempts to follow Dante's road map. Determined to meet Satan himself, Carpentier treks through the Nine Layers of Hell led by Benito Mussolini, and encounters countless mental and physical tortures. As he struggles to escape, he's taken through new, puzzling, and outlandish versions of sin—recast for the present day.

“Inferno is quite literally a cake walk through hell, with a science fiction writer as Dante and Benito Mussolini as Virgil. I kid you not, Pournelle and Niven have had the chutzpah to re-write Dante's Inferno as if they were some unholy hybrid of Roger Zelazny, Robert Heinlein, and Phil Jose Farmer. You are right there in the nether-reaches of the ultimate Sam Peckinpah movie with all the matter-of-fact solidity of a Hal Clement novel. It gets to you, it really does. This being lunacy of a transcendent order.” —Norman Spinrad

“A fast, amusing and vivid book, by a writing team noted for intelligence and imagination.” —Roger Zelazny on Inferno