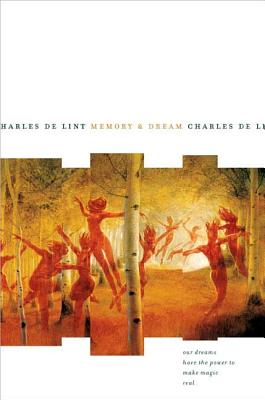 From World Fantasy Award-winning author Charles de Lint, a tale of love, courage, and the transforming power of imagination

Isabelle Copley's visionary art frees ancient spirits. As the young student of the cruel, brilliant artist Vincent Rushkin, she discovered she could paint images so vividly real they brought her wildest fantasies to life. But when the forces she unleashed brought tragedy to those she loved, she turned her back on her talent — and on her dreams.

Now, twenty years later, Isabelle must come to terms with the shattering memories she has long denied, and unlock the slumbering power of her brush. And, in a dark reckoning with her old master, she must find the courage to live out her dreams and bring the magic back to life.


Praise For Memory and Dream (Newford)…

“It is hard to imagine urban fantasy done better than it is by de Lint at his best, and this book shows his imagination and craft at their highest levels. . . . Deserves the highest recommendation and the widest readership.” —Booklist on Memory and Dream

“A novel of scope and ambition . . . The glamour and wonder of his earliest novels has matured into a book of sophisticated and human concern.” —Science Fiction Age on Memory and Dream

“Top form . . . His multi-voiced, time-shifting narrative beautifully evokes a sense of creative community, making it almost possible to believe that the rarified aesthetic atmosphere might well be capable of conjuring up a spirit or two.” —Publishers Weekly on Memory and Dream

“Charles de Lint is a master of contemporary fantasy and nowhere is that more apparent than here … A pleasure to read.” —KLIATT on Memory and Dream

“[De Lint] moves gracefully through the borders between reality and imagination, weaving a powerful tale about the relationship between an artist and her work. A strong addition to fantasy collections.” —Library Journal on Memory and Dream

“A novel of scope and ambition . . . The glamour and wonder of his earliest novels has matured into a book of sophisticated and human concern.” —Science Fiction Age on Memory and Dream

“De Lint is as engaging a stylist as Stephen King, but considerably more inventive and ambitious.” —Toronto Globe and Mail

Charles de Lint and his wife, the artist MaryAnn Harris, live in Ottawa, Ontario, Canada. His evocative novels, including Moonheart, Forests of the Heart, and The Onion Girl, have earned him a devoted following and critical acclaim as a master of contemporary magical fiction in the manner of storytellers like John Crowley, Jonathan Carroll, Alice Hoffman, Ray Bradbury, and Isabel Allende.
Loading...
or support indie stores by buying on