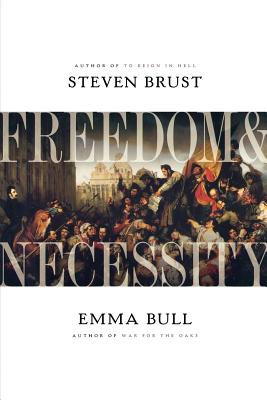 It is 1849. Across Europe, the high tide of revolution has crested, leaving recrimination and betrayal in its wake. From the high councils of Prussia to the corridors of Parliament, the powers-that-be breathe sighs of relief. But the powers-that-be are hardly unified among themselves. Far from it . . .

On the south coast of England, London man-about-town James Cobham comes to himself in a country inn, with no idea how he got there. Corresponding with his brother, he discovers he has been presumed drowned in a boating accident. Together they decide that he should stay put for the moment, while they investigate what may have transpired. For James Cobham is a wanted man—wanted by conspiring factions of the government and the Chartists alike, and also targeted by a magical conspiracy inside his own family.

And so the adventure of Freedom and Necessity begins… leading the reader through every corner of mid-nineteenth-century Britain, from the parlors of the elite to the dens of the underclass. Steven Brust and Emma Bull have crafted a masterful mix of fantasy and historical fiction. Not since Wilkie Collins or Conan Doyle has there been such a profusion of guns, swordfights, family intrigues, women disguised as men, occult societies, philosophical discussions, and, of course, passionate romance.


Praise For Freedom and Necessity…

“Resembling the works of Tolstoy and Dickens in the plethora of characters, Stoker and Mary Shelley in the exposition, the novel brings together intrigue, adventure, politics, and magic in a complex epic that astonishes the reader.” —Library Journal on Freedom and Necessity

“Complex and masterly . . . A skilful act of ventriloquism, faithfully reproducing the argot of the early Victorian upper classes with only a few lapses, and plausibily weaving the plot into the politics at the time. Imaginative and finely written.” —Interzone on Freedom and Necessity

“Expertly styled after a 19th-century English epistolary novel . . . Engaging characters and surprises that, for all their thrills, stem quite naturally from the groundwork that the authors have so cleverly laid.” —Publishers Weekly on Freedom and Necessity

“One of the most impressive novels I've read in a long time.” —Locus on Freedom and Necessity

“Brilliantly written as an epistolary novel, rich with historical detail, enlivened by fully drawn characters, this is one of the most unusual and certainly one of the best fantasy novels of the year.” —Science Fiction Chronicle on Freedom and Necessity

STEVEN BRUST is the author of a number of bestselling fantasy novels, including two New York Times bestsellers, Dzur and Tiassa. He lives in Minneapolis, Minnesota.

Emma Bull’s War for the Oaks won the Locus Award for Best First Novel. Her subsequent works have included Falcon, the Hugo, Nebula, and World Fantasy Award-finalist Bone Dance, Finder, and (with Steven Brust) Freedom and Necessity. She lives in Tucson, Arizona.
Loading...
or support indie stores by buying on