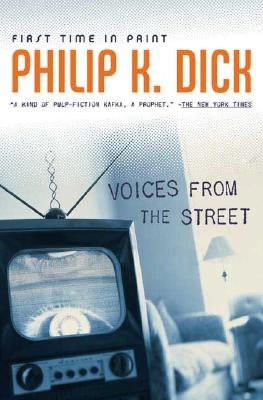 Voices From the Street (Hardcover)

Stuart Hadley is a young radio electronics salesman in early 1950s Oakland, California. He has what many would consider the ideal life; a nice house, a pretty wife, a decent job with prospects for advancement, but he still feels unfulfilled; something is missing from his life. Hadley is an angry young man--an artist, a dreamer, a screw-up. He tries to fill his void first with drinking, and sex, and then with religious fanaticism, but nothing seems to be working, and it is driving him crazy. He reacts to the love of his wife and the kindness of his employer with anxiety and fear.One of the earliest books that Dick ever wrote, and the only novel that has never been published, Voices from the Street is the story of Hadley's descent into depression and madness, and out the other side.Most known in his lifetime as a science fiction writer, Philip K. Dick is growing in reputation as an American writer whose powerful vision is an ironic reflection of the present. This novel completes the publication of his canon.

PHILIP K. DICK has had six movies based on his stories made, including the classic, "Blade Runner." Prior to his death in 1982, Dick lived in California.

Praise For Voices From the Street…

"It may be hard for some to accept that the same writer who recently snuck into the American canon as a visionary and paranoid pop surrealist also penned a half dozen or more proletarian-realist novels set in the California of the '50's and early '60's, the best of which occupy a region demarcated by Richard Yates on one side and Charles Willeford on another. But accept it."  --Jonathan Lethem, author of The Fortress of Solitude "One of the most original practitioners writing any kind of fiction." -- The Sunday Times (London)
"A kind of pulp-fiction Kafka, a prophet." --The New York Times "Dick is entertaining us about reality and madness, time and death, sin and salvation.... We have our own homegrown Barges."-- Ursula K. LeGuin "If someone were to write a history of the future as it has been dreamed up by Hollywood over the years, the chapter on today's tomorrow would belong in large part to Philip K. Dick." --The Washington Post "[Dick] sees all the sparkling--and terrifying--possibilities . . . that other authors shy away from." -Paul Williams, Rolling Stone "Dick was . . . one of the genuine visionaries that North American fiction has produced in this century." -L.A. Weekly "When it comes to intellectually challenging and deeply philosophical grist for contemporary screenwriters, few literary minds have been as reliably fertile as that of the late science-fiction master Philip K. Dick. The longtime Berkeley resident's many novels and short stories overflow with the kind of suspense, intrigue and heroics that interest Hollywood." --SF Chronicle