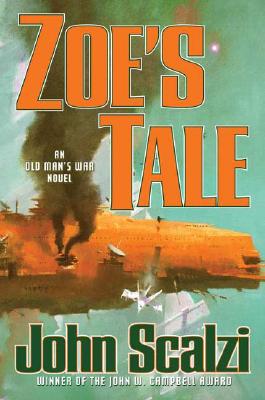 “This coming-of-age tale of a teenage girl in a frontier colony on the edge of space is nothing short of remarkable. The voice is pitch-perfect, the plot is compelling, and the resolution of the tale is deeply moving. This stellar work from one of the luminaries in the realm of science fiction will appeal to the literary set, sci-fi fans, book groups, and teens looking for quality reads beyond Orson Scott Card, J.K. Rowling, and Stephenie Meyer.”
— Joe Drabyak, Chester County Book & Music Company, West Chester, PA
View the List

How do you tell your part in the biggest tale in history?
I ask because it's what I have to do. I'm Zoe Boutin Perry: A colonist stranded on a deadly pioneer world. Holy icon to a race of aliens. A player (and a pawn) in a interstellar chess match to save humanity, or to see it fall. Witness to history. Friend. Daughter. Human. Seventeen years old.
Everyone on Earth knows the tale I am part of. But you don't know my tale: How I did what I did -- how I did what I had to do -- not just to stay alive but to keep you alive, too. All of you. I'm going to tell it to you now, the only way I know how: not straight but true, the whole thing, to try make you feel what I felt: the joy and terror and uncertainty, panic and wonder, despair and hope. Everything that happened, bringing us to Earth, and Earth out of its captivity. All through my eyes.
It's a story you know. But you don't know it all.

“The Last Colony will kick your butt across the galaxy and make you care.” — Rick Kleffel, The Agony Column, on The Last Colony “Scalzi’s captivating blend of off-world adventure and political intrigue remains consistently engaging.” — Booklist on The Last Colony "In Heinleinesque fashion, the book is loaded with scenes of comradeship, isolation, ruthlessness and the protocols, which govern the lives of active-duty soldiers. But this is where Scalzi, famous for his blog ‘The Whatever,’ surpasses Heinlein. Scalzi weaves in subtle discussions of humanity's growing fear of aging and our simultaneous attraction and repulsion to the Frankenstein-like creatures we are able to create." — San Antonio Express-News on The Ghost Brigades

John Scalzi won the 2006 John W. Campbell Award for Best New Writer, and his debut novel "Old Man's War" was a finalist for science fiction's Hugo Award. His other books include "The Ghost Brigades," "The Android's Dream" and "The Last Colony." He has won the Hugo Award, the "Romantic Times" Reviewers Choice Award for science-fiction, the Seiun, The Kurd Lasswitz and the Geffen awards. His weblog, Whatever, is one of the most widely-read web sites in modern SF. Born and raised in California, Scalzi studied at the University of Chicago. He lives in southern Ohio with his wife and daughter.