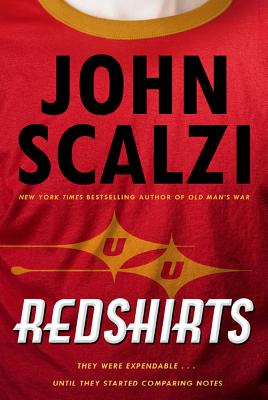 Life couldn't be better…until Andrew begins to pick up on the fact that (1) every Away Mission involves some kind of lethal confrontation with alien forces, (2) the ship's captain, its chief science officer, and the handsome Lieutenant Kerensky always survive these confrontations, and (3) at least one low-ranked crew member is, sadly, always killed.

Not surprisingly, a great deal of energy below decks is expendedon avoiding, at all costs, being assigned to an Away Mission. Then Andrew stumbles on information that completely transforms his and his colleagues' understanding of what the starship Intrepid really is…and offers them a crazy, high-risk chance to save their own lives.

Redshirts is the winner of the 2013 Hugo Award for Best Novel.


Praise For Redshirts: A Novel with Three Codas…

“Gripping… A perfectly executed plot clicks its way to a stunningcourtroom showdown in a cathartic finish.” —Publishers Weekly, starred review, on Fuzzy Nation

“In a genre flooded with bloated epics, it's a real pleasure toread a story like this, as compactly and directly told as a punchto the stomach.” —Kirkus Reviews, starred review, on Fuzzy Nation

“If Stephen King were to try his hand at science fiction, he'd belucky to be half as entertaining as John Scalzi.” —Dallas Morning News on The Ghost Brigades