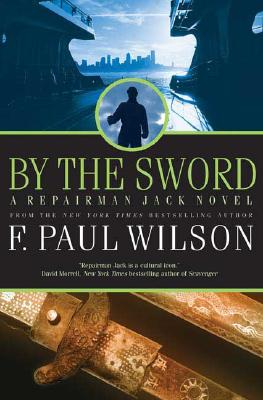 By the Sword takes up the adventures of Repairman Jack directly after Bloodline.  Jack is hired to find a legendary Japanese sword, a katana stolen from the Hiroshima Peace Museum and brought to New York City. Central characters include the members of a weird Japanese cult, a young Japanese businessman and his three Yakuza bodyguards, plus Hank Thompson, the Kicker cult leader from Bloodline. The cult, the businessman, the Yakuza, and the Kickers are looking for the sword as well.

Also in the mix is the pregnant teenager carrying a child, loaded with abnormal DNA, who will be a decisive force in the cosmic shadow war raging behind the scenes. She becomes a pawn in the game, hunted by both sides. Following his usual m.o., Jack maneuvers all sides into a bloody melee from which he plans to waltz away with the fabled katana. Of course, when things don’t go as planned, Jack must improvise (and he hates to improvise). By the Sword takes F. Paul Wilson’s trademark breakneck pacing and interweaving storylines to a new level.


Praise For By the Sword: A Repairman Jack Novel…

“Like its predecessors, this novel shows why Jack’s saga has become the most entertaining and dependable modern horror-thriller series.”
—Publishers Weekly on Bloodline


“The plot moves briskly but never recklessly, the dialogue is salty and witty, and the characters have enough dimension to elevate them above the genre pack. Jack, introduced more than twenty years ago, is aging gracefully.”
—Publishers Weekly on Infernal