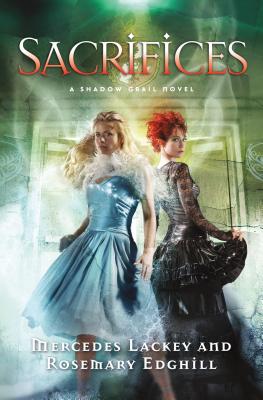 The students of Oakhurst Academy believe they have triumphed over the Shadow Knights. But Spirit, Burke, Muirin, Loch, and Addie know better. Under the guise of a company called Breakthrough Adventure Systems, the Shadow Knights have actually taken over the campus. The new regime is brutal, designed to turn the students into soldiers wielding both weapons and magic. Anyone who protests disappears.

Desperate, the group decides that Muirin should go undercover to spy on Breakthrough. But Muirin's act is a little too good, and Spirit begins to fear that her friend's loyalties might have truly changed. Surrounded by enemies and friends who suddenly seem like strangers, Spirit has decide who can--and cannot--be trusted.

“Lackey and Edghill know how to spin a yarn… Fast-paced action… There's also a touch of romance, and readers who appreciate everything from X-Men to Harry Potter will be begging for the sequel.” —Booklist on Legacies

“A really good read. The authors do a great job of juxtaposing a scary theme and the ordinary angst of adolescents. They also do a nice job with the metaphor of magical gifts as means of self-actualization. Legacies has enough action for reluctant readers, and enough character development for teens to see themselves in this group of friends. The book's fans are sure to eagerly await Spirit's discovery of her mage gift and further confrontations with the forces of evil.” —School Library Journal on Legacies

Rosemary Edghill is a prolific writer in several genres, under her own name and various pseudonyms. Her Bast books, witty mysteries featuring a Wiccan amateur detective, were collected in Bell, Book, and Murder. She has also written Regency Romances and fantasy novels, including several collaborations with Mercedes Lackey (Spirits White as Lightning and Mad Maudlin) and Andre Norton (Shadow of Albion and Leopard in Exile).