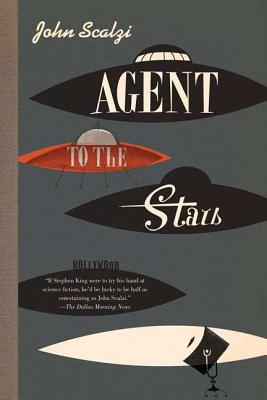 Agent to the Stars

The space-faring Yherajk have come to Earth to meet us and to begin humanity's first interstellar friendship. There's just one problem: They're hideously ugly and they smell like rotting fish.

So getting humanity's trust is a challenge. The Yherajk need someone who can help them close the deal.

Enter Thomas Stein, who knows something about closing deals. He's one of Hollywood's hottest young agents. But although Stein may have just concluded the biggest deal of his career, it's quite another thing to negotiate for an entire alien race. To earn his percentage this time, he's going to need all the smarts, skills, and wits he can muster.


Praise For Agent to the Stars…

“With a plot that starts out as the rough life of a young agent in Hollywood and rapidly metamorphoses into B-movie territory as a remarkably intelligent first-contact yarn, this book is absurd, funny, and satirically perceptive.” —Booklist on Agent to the Stars

“If Stephen King were to try his hand at science fiction, he'd be lucky to be half as entertaining as John Scalzi.” —Dallas Morning News on The Ghost Brigades