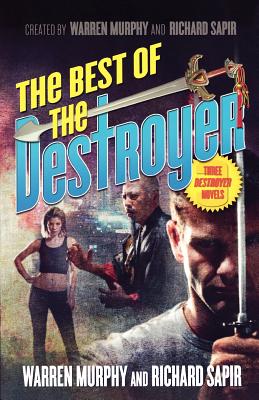 The Best of the Destroyer (The New Destroyer)

In combination with the launch of The New Destroyer, brand-new novels continuing this bestselling, action-packed series, Forge is publishing this omnibus of three of the definitive Destroyer novels. Hand-picked by co-creator and co-author Warren Murphy, these three novels serve as both a revisit to the golden age of the series and a great introduction to what Remo Williams and his Sinanju master, Chiun, have been up to for the past thirty years. Included are:

The US President calls upon the service of Remo and Chiun to smash an Asian conspiracy that could lead to a US-China confrontation . . . if the superhuman weapon of destruction fails, it could mean the end of the USA.

There is a secret only Chiun knows. America has committed a sin against him he cannot pardon -- and he will not even share it with Remo Williams, the Destroyer, whom he has taught all his skills and loves as a son. Deep in Africa, countless feuds that have blazed for many centuries are quickly being resolved by death and massacre. A massive conspiracy is unearthed surrounding the centuries-old slave trade, and only Remo can unravel it.

After a brutal fight in the streets of New Jersey, Remo and Chiun find themselves in battle after battle. Their arch-enemy and fellow assassin, the Maestro of Mayhem known as Nuihc, is hoping to knock out his competition. It all comes to a boil in Chiun's hometown in North Korea as the Destroyer finds himself in a fight to the death.


Praise For The Best of the Destroyer (The New Destroyer)…

“Cheerful mayhem.” —The New York Times on The Destroyer series

Warren Murphy's books and stories have sold fifty million copies worldwide and won a dozen national awards. He has created a number of book series, including the Trace series and the long-running satiric adventure, The Destroyer.