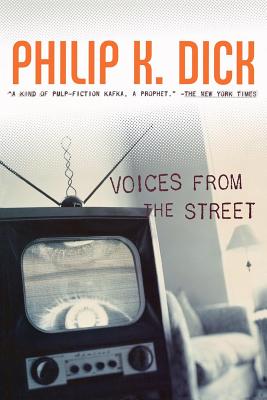 Voices From the Street (Paperback)

Stuart Hadley is a radio electronics salesman in early 1950s Oakland, California. He has what many would consider the ideal life; a nice house, a pretty wife, a decent job with prospects for advancement, but he still feels unfulfilled. Something is missing from his life. Hadley is a restless young man—an artist, a dreamer, a screw-up. He reacts to the love of his wife and the kindness of his employer with anxiety and fear. He tries to fill his void first with drinking, and then with an affair, and finally with religious fanaticism, but nothing seems to be working, and it is driving him crazy.

Voices from the Street is the story of Hadley's descent into depression and madness, and his emergence out the other side.

Philip K. Dick has had many movies based on his stories, including the classic, Blade Runner. Prior to his death in 1982, Dick lived in California.

Praise For Voices From the Street…

“It may be hard for some to accept that the same writer who recently snuck into the American canon as a visionary and paranoid pop surrealist also penned a half dozen or more proletarian-realist novels set in the California of the '50's and early '60's, the best of which occupy a region demarcated by Richard Yates on one side and Charles Willeford on another. But accept it.” —Jonathan Lethem, author of The Fortress of Solitude

“He reworks the territory of soured domesticity (à la Richard Yates and John Updike) in a working-class milieu anticipating Raymond Carver. Decades later, his oeuvre (like Philip Roth's) is lovingly enshrined in our national pantheon.” —LA Times on Voices from the Street

“Well written, it is a welcome addition to its author's large and brilliant canon.” —Booklist on Voices from the Street