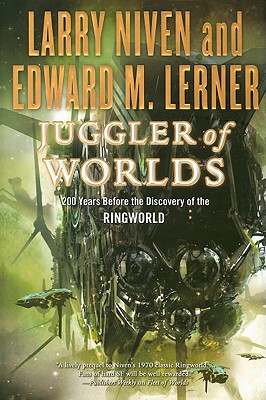 For too long, the Puppeteers have controlled the fate of worlds.  Now Sigmund is pulling the strings... Covert agent Sigmund Ausfaller is Earth's secret weapon, humanity's best defense against all conspiracies, real and potential - and imaginary - of foes both human and alien.  Who better than a brilliant paranoid to expose the devious plots of others? He may finally have met his match in Nessus, representative of the secretive Puppeteers, the elder race who wield vastly superior technologies.  Nessus schemes in the shadows with Earth's traitors and adversaries, even after the race he represents abruptly vanishes from Known Space. As a paranoid, Sigmund had always known things would end horribly for him.  Only the when, where, how, why, and by whom of it all had eluded him.  That fog has begun to lift... But even Sigmund has never imagined how far his investigations will take him - or that his destiny is entwined with the fates of worlds.


Praise For Juggler of Worlds…

“Niven and Lerner…clearly enjoy revisiting aliens familiar from Niven’s menagerie while spinning an elaborate tale of interplanetary intrigue.  Their many fans will, too.”--Booklist


"Niven and Lerner...adroitly expand upon familiar ground...and, at the same time, pour it into an entirely new bottle."--Starlog

"A lively prequel to Niven's 1970 classic, Ringworld. . . .  Fans of hard SF will be well rewarded."--Publishers Weekly on Fleet of Worlds "Exceptional freshness and suspense . . .  full of startling revelations about human and puppeteer politics."--Booklist on Fleet of Worlds "A far-future SF mystery/adventure set two centuries before the discovery of the Ringworld by humans. . . . . Intriguing human and alien characters and lucid scientific detail."--Library Journal on Fleet of Worlds

LARRY NIVEN is the multiple Hugo- and Nebula-winning author of the Ringworld series, along with many other science fiction masterpieces. His "Beowulf's Children," co-authored with Jerry Pournelle and Steven Barnes, was a "New York Times" bestseller. He lives in Chatsworth, California. EDWARD M. LERNER has degrees in physics and computer science, a background that kept him mostly out of trouble until he began writing SF full-time. His books include "Probe," "Moonstruck," and the collection "Creative Destruction." "Fleet of Worlds" was his first collaboration with Larry Niven. He lives in Virginia with Ruth, his wife of a mere thirty-five years.
Loading...
or
Not Currently Available for Direct Purchase