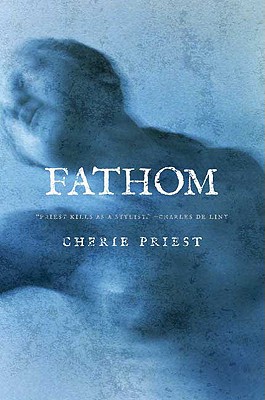 “I can’t fathom them, and neither can you.”

The ageless water witch Arahab has been scheming for eons, gathering the means to awaken the great Leviathan. She aims to bring him and the old gods back to their former glory, caring little that their ascendance will also mean an end to the human race. However, awakening the Leviathan is no small feat. In fact, Arahab can’t complete the ritual without human aid.

Arahab’s first choice is José Gaspar, a notorious sea pirate from eighteenth-century Spain. But when the task proves too difficult for Gaspar, she must look elsewhere, biding her time until the 1930’s, when the ideal candidate shows up: a slightly deranged teenager named Bernice.

Bernice is sophisticated, torn from New York and forced to spend a miserable summer on Anna Maria Island, a tiny rock off the coast of Florida. She’s also been saddled with the companionship of her farm-raised cousin Nia. Eventually, Bernice’s disenchantment gives way to rage, which in turn leads her to commit a deadly crime. When Nia won’t cover for Bernice’s actions, she turns on Nia, chasing her into the deadly coastal waves.

But the timing is right and the elementals have better ideas: the moment the girls go under, Bernice is commandeered for Arahab’s task force, and Nia is turned into a strange and powerful new creature by a servant of the earth who doesn’t want to surrender his green fields and muddy plains—not yet, at least. Add in a hapless fire inspector who’s just trying to get his paperwork in order, a fire god whose neutrality has been called into question, and a bizarre religious cult, and rural Florida doesn’t seem quite so sleepy anymore.

Cherie Priest, who stormed onto the scene with the stunning Southern Gothic trio that began with Four and Twenty Blackbirds, now brings the same masterful writing and unforgettable characterization to the realm of near-contemporary rural fantasy. The result, Fathom, is fast-paced, stunning, and quite unlike anything you’ve ever read.

“Chock-full of chilling details and soaked to the bone with suspense.” --Southern Living on Not Flesh Nor Feathers

“Well-written, quick paced and detailed, every page is a shivering delight.” --BookPage on Not Flesh Nor Feathers

“Cherie Priest is to dark fantasy what fresh roasted coffee is to mornings: simply essential.” --Paul Goat Allen on Wings to the Kingdom

“A remarkably assured debut, a creepy modern-day Southern gothic that doesn’t rely on cliche but delivers an emotional, powerful tale of self-discovery and the supernatural.” --San Francisco Chronicle on Four and Twenty Blackbirds

“Breathlessly readable, palpably atmospheric and compellingly suspenseful, Four and Twenty Blackbirds is a considerable debut. It’s written with great control and fluency, and it looks like the start of quite a career.” --Ramsey Campbell

“[Priest’s] voice is rich, earthy, soulful, and deliciously southern as she weaves a disturbing yarn like a master! Awesome—gives you goosebumps!” --L.A. Banks on Four and Twenty Blackbirds

Cherie Priest debuted to great acclaim with "Four and Twenty Blackbirds," "Wings to the Kingdom," and "Not Flesh Nor Feathers," a trilogy of Southern Gothic ghost stories featuring heroine Eden Moore. She is also the author of "Dreadnought" and "Boneshaker," which was nominated for a Nebula and Hugo Award, won the Locus Award for best science-fiction novel, and was named Steampunk Book of the Year by steampunk.com. Born in Tampa, Florida, Priest earned her master's in rhetoric at the University of Tennessee. She lives in Seattle, Washington, with her husband, Aric, and a fat black cat named Spain.
Loading...
or
Not Currently Available for Direct Purchase