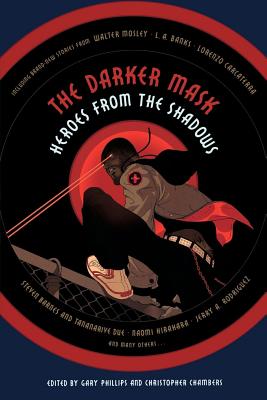 Expanding on the concept behind Byron Preiss's Weird Heroes from the 1970s, George R. R. Martin's Wild Card series, and Michael Chabon's McSweeney's Mammoth Treasury of Thrilling Tales, The Darker Mask is a collection of original prose stories recalling the derring-do of the beings we call Superheroes and the worlds they fight to save. But unique to The Darker Mask stories is that these plots and characters color a literary universe outside of what has been predominantly white, idiosyncratic, and male in previous homages to pulp. This is the stuff of urban legends, new mythos, and extraordinary folks who might live in a soon-to-be-gentrified ghetto, the dreary rust-belt of the city, or in another dimension. The Darker Mask offers an eclectic mix of popular fiction writers exploring worlds gritty, visceral, and fantastic.


Praise For The Darker Mask…

"A solid and interesting collection that should appeal to fans of the superhero genre, especially those willing to explore the subject from a new and darker perspective." —Booklist

CHRISTOPHER CHAMBERS is the author of Sympathy for the Devil and A Prayer for Deliverance. He is currently working on a historical novel titled Yella Patsy's Boys, about the African-American experience during the American Revolution.
Loading...
or support indie stores by buying on