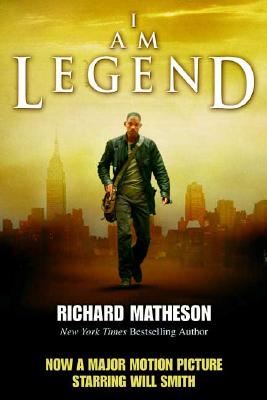 Robert Neville may well be the last living man on Earth . . . but he is not alone.
An incurable plague has mutated every other man, woman, and child into bloodthirsty, nocturnal creatures who are determined to destroy him. By day, he is a hunter, stalking the infected monstrosities through the abandoned ruins of civilization. By night, he barricades himself in his home and prays for dawn.... Richard Matheson's classic novel has now been transformed by Warner Bros. into a major motion picture starring Academy Award nominee Will Smith. Directed by Francis Lawrence ("Constantine"), the film opens nationwide in December 2007.

"One of the most important writers of the twentieth century."--Ray Bradbury "I think the author who influence me the most as a writer was Richard Matheson. Books like I Am Legend were an inspiration to me." --Stephen King

"Matheson is one of the great names in American terror fiction."--The Philadelphia Inquirer

"Matheson inspires, it's as simple as that."--Brian Lumley

Richard Matheson is "The New York Times" bestselling author of "Hell House," "Other Kingdoms," "Somewhere in Time," "The Incredible Shrinking Man," "A Stir of Echoes," "The Beardless Warriors," "The Path," "Seven Steps to Midnight," "Now You See It...," and "What Dreams May Come," among others. He was named a Grand Master of Horror by the World Horror Convention, and received the Bram Stoker Award for Lifetime Achievement. He has also won the Edgar, the Spur, and the Writer's Guild awards. In 2010, he was inducted into the Science Fiction Hall of Fame. In addition to his novels, Matheson wrote screenplays, and he wrote for several Twilight Zone episodes, including "Nightmare at 20,000 Feet," based on his short story. He was born in New Jersey and raised in Brooklyn, and fought in the infantry in World War II. He earned his bachelor's degree in journalism from the University of Missouri. He lives in Calabasas, California.
Loading...
or
Not Currently Available for Direct Purchase