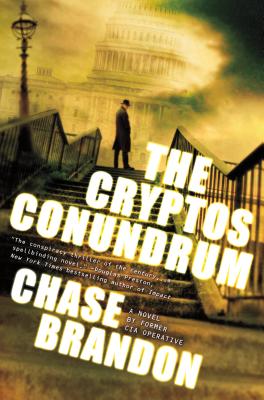 Former CIA undercover operative Chase Brandon takes us deep into the mystery of Cryptos, a work of art containing a seemingly uncrackable code, in "The Cryptos Conundrum."

A fifteen-foot-tall steel sculpture stands in the courtyard of the Central Intelligence Agency, emblazoned with a message that no one can decipher. The three-inch-high letters on the sculpture form a coded message that is central to the survival of mankind--a message hidden in plain sight, displayed in a public space, with the full text available to anyone who has an internet connection.

One man knows exactly what the statue's message says--because he created it.

Dr. Jonathan S. Chalmers heads a CIA unit tasked with containing the greatest secret our government has ever kept and planning for its consequences. He alone knows the full story of the threats that face America. Threats that would terrify us if we knew them. Threats that have shaped our country's past, present, and future. Threats that have become his life's work, requiring all his talents, all his energy, and even the lives of members of his family.

If Chalmers can't save us, nobody can.

CHASE BRANDON is a thirty-five year operations officer in the CIA's Clandestine Service. He lived undercover for twenty-five years and retired from undercover assignments in 2006, but continues to consult with several intelligence community agencies, the Department of Defense, and numerous state and federal law enforcement organizations. In his final assignment, Brandon was a senior staff officer for the director of the Central Intelligence Agency, serving as an Agency spokesman and CIA's official liaison to the entertainment industry. He provided technical consultation to many feature films, television series, and documentary programs, such as "Mission Impossible III," "The Bourne Identity," "Alias," and "24," and the Discovery, Learning, and Military Channels.
Loading...
or
Not Currently Available for Direct Purchase