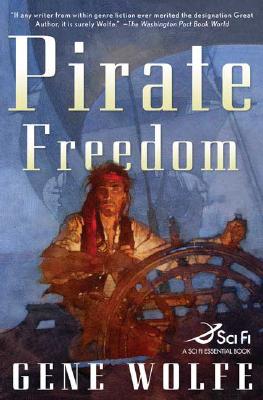 As a young parish priest, Father Christopher has heard many confessions, but his own tale is more astounding than any revelation he has ever encountered in the confessional . . . for Chris was once a pirate captain, hundreds of years before his birth.

Fresh from the monastery, the former novice finds himself inexplicably transported back to the Golden Age of Piracy, where an unexpected new life awaits him.  At first, he resists joining the notorious Brethren of the Coast, but he soon embraces the life of a buccaneer, even as he succumbs to the seductive charms of a beautiful and enigmatic senorita.  As the captain of his own swift ship, which may or may not be cursed, he plunders the West Indies in search of Spanish gold.  From Tortuga to Port Royal, from the stormy waters of the Caribbean to steamy tropical jungles, Captain Chris finds danger, passion, adventure, and treachery as he hoists the black flag and sets sail for the Spanish mainland.

Where he will finally come to port only God knows . . . .

Pirate Freedom is a captivating new masterpiece by the award-winning author of The Wizard Knight and Soldier of Sidon.

"Gene Wolfe is the smartest, subtlest, most dangerous writer alive today, in genre or out of it. If you don't read this book you'll have missed out on something important and wonderful and all the cool people will laugh at you."--Neil Gaiman, author of  Anansi Boys, on The Knight
"Most writers of fantasy or science fiction know how to tell rattling good stories. But Gene Wolfe not only entertains, he invests his work with a complexity and trickiness that place him among the most important writers of our time." --The Washington Post  "A welcome addition from one of the genre's most literate and thoughtful authors; highly recommended." --Library Journal starred review on Soldier of Sidon

"Powerful and pleasing. It's all rather like Agatha Christie's Death on the Nile, only vastly more interesting and significant. Wolfe is a grand master of the symbolic epic, and as with any other of his novels, the events in Sidon will fuel years of re-reading, decoding, and reinterpretation. This is a remarkable artistic accomplishment by Gene Wolfe." -Nick Gevers, Locus on Soldier of Sidon

Gene Wolfe is winner of the World Fantasy Award for Life Achievement, as well as two Nebula Awards, the John W. Campbell Memorial Award, the British Fantasy Award, and the Prix Apollo.
Loading...
or
Not Currently Available for Direct Purchase