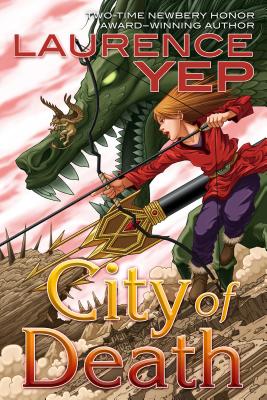 Scirye and her loyal companions chase the villainous Mr. Roland for a final showdown at Riye Srukalleyis, the City of Death, located in the heart of the Kushan Empire, along the Silk Road. There, they reunite with old friends, meet new allies, and confront an even more dangerous foe....

This is the thrilling conclusion to the trilogy that began with City of Fire and City of Ice by esteemed storyteller Laurence Yep, who has been one of the preeminent Asian-American authors for children for the past forty years.

LAURENCE YEP is the critically acclaimed author of more than sixty books for children and young adults, including two Newbery Honor Award winners: Dragonwings and Dragon’s Gate. In 2005, he was awarded the Laura Ingalls Wilder Award for a substantial and lasting contribution literature for children. Yep lives with his wife, author and editor Joanne Ryder, in California.

“A magnificent adventure, mixing both history and fantasy.... This reader is looking forward to the final book in this most enjoyable trilogy.” —VOYA on City of Ice

“Yep's second entry in the City Trilogy sings and crackles with as much detail and action as the first.... New readers have enough clues to feel instantly at home. Makes a great read aloud too.” —Booklist on City of Ice