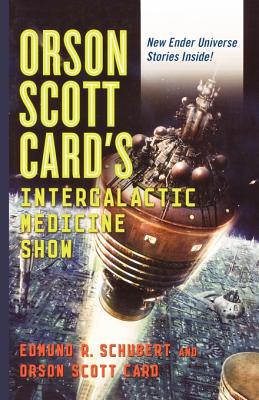 Bestselling writer Orson Scott Card founded the online magazine Intergalactic Medicine Show in 2006. It has been a big success, drawing submissions from well-known sf and fantasy writers, as well as fostering some amazing new talents. This collection contains some of the best of those stories from the past year.

There is fiction from David Farber, Tim Pratt, and David Lubar among others, also four new Ender's Game universe stories by Card himself. This collection is sure to appeal to Card's fans, and be a great ambassador to them for these other talented writers.

Praise for Ender's Game "An undeniable heavyweight. . . . This book combines Card's quirky style with his hard ethical dilemmas and sharply drawn portraits."--New York Daily News
"Card has taken the venerable SF concepts of a superman and an interstellar war against aliens, and, with superb characterization, pacing, and language, combined them into a seamless story of compelling power."--Booklist  "This book provides a harrowing look at the price we pay for trying to mold our posterity in our own aggressive image of what we believe is right."--The Christian Science Monitor

Ed Schubert is the editor of Intergalactic Medicine Show.