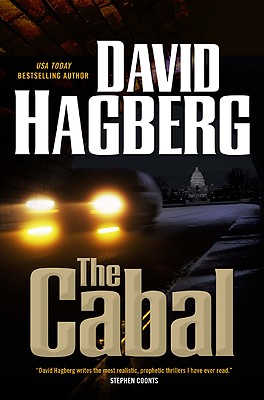 In Washington, CIA operative Todd Van Buren meets with a Washington Post investigative reporter who has uncovered strong evidence that a powerful lobbyist has formed a shadowy group called the Friday Club, a cabal whose members include high-ranking men inside the government: a White House adviser, a three star general at the Pentagon, deputy secretaries at the State Department, Homeland Security, the FBI and even the CIA.

That afternoon Van Buren, son-in-law of the legendary spy Kirk McGarvey, is brutally gunned down because of what he’s been told.  The same evening the reporter and his family are killed, all traces of the shadow group erased.

A grief stricken McGarvey is drawn into the most far-reaching and bizarre investigation of his career, the stakes of which could destabilize the U.S. government, and shake the foundations of the world financial order.


Praise For The Cabal…

“Hagberg is known for being prescient about terrorist events, and the finale sets up the terrifying challenge McGarvey will face in the next installment. One can only hope America's real-life enemies haven't thought to study this series.”
--Publishers Weekly on Dance with the Dragon


“David Hagberg writes the most realistic, prophetic thrillers I have ever read. His books should be required reading in Washington.”
--Stephen Coonts, New York Times bestselling author of The Assassin


“Hagberg, a maven of Mach speed mayhem, intricately moves pieces around his global chessboard until many bodies, plane crashes, and running sea battles later, action hero McGarvey wipes out the bad guys.  Hagberg’s long yarns always muscle their way to the top of the techno-intrigue-warfare genre.”
--Booklist on Joshua's Hammer

David Hagberg has published numerous novels of suspense, including his bestselling thrillers featuring former CIA director Kirk McGarvey, which include "Abyss," "The Expediter," and "Allah's Scorpion." He has earned a nomination for the American Book Award, three nominations for the Mystery Writers of America Edgar Allan Poe Award and three Mystery Scene Best American Mystery awards. He has spent more than thirty years researching and studying US-Soviet relations during the Cold War. Hagberg joined the Air Force out of high school, and during the height of the Cold War, he served as an Air Force cryptographer. He attended the University of Maryland and University of Washington. Born in Duluth, Minnesota, he now lives with his wife Laurie in Sarasota, Florida.
Loading...
or
Not Currently Available for Direct Purchase