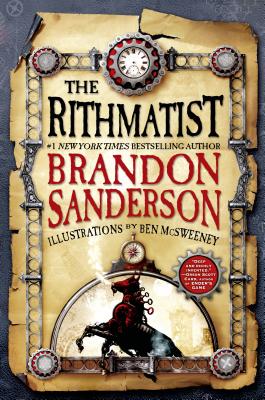 More than anything, Joel wants to be a Rithmatist. Chosen by the Master in a mysterious inception ceremony, Rithmatists have the power to infuse life into two-dimensional figures known as Chalklings. Rithmatists are humanity's only defense against the Wild Chalklings—merciless creatures that leave mangled corpses in their wake. Having nearly overrun the territory of Nebrask, the Wild Chalklings now threaten all of the American Isles.

As the son of a lowly chalkmaker at Armedius Academy, Joel can only watch as Rithmatist students study the magical art that he would do anything to practice. Then students start disappearing—kidnapped from their rooms at night, leaving trails of blood. Assigned to help the professor who is investigating the crimes, Joel and his friend Melody find themselves on the trail of an unexpected discovery—one that will change Rithmatics—and their world—forever.

Bestselling author Brandon Sanderson brings his unique brand of epic storytelling to the teen audience with an engrossing tale of danger and suspense—the first of a series. With his trademark skills in world-building, Sanderson has created a magic system that is so inventive and detailed that that readers who appreciate games of strategy and tactics just may want to bring Rithmatics to life in our world.

“Illustrations from McSweeney, fiesty characters, and a complex plot likely to unwind over several volumes, this high-spirited, exciting story will appeal to readers of all ages.” —Publishers Weekly starred review

“Fantasy readers should devour this well-crafted mix of action and setup, enriched by thoroughly detailed cultural and historical background and capped by a distinctly unsettling twist.” —Kirkus starred review

“The Rithmatist contains some very good surprises on the way to a pleasingly nifty conclusion.” —New York Times Book Review

“The Rithmatist, while it's definitely as clear and exciting as a YA novel should be, is every bit as deep and richly invented as the best of Sanderson's adult novels…. Sanderson at his best, for adults and young readers alike.” —Orson Scott Card

“Brandon Sanderson has created an ingenious new martial art where the chalk is mightier than the sword. In his alternative, dangerous version of the world, brave young soldiers must battle back dark forces armed with the nerves of a warrior and the skills of an artist. It's a fun read with a unique take on fighting where if you can't draw…you die.” —D.J. MacHale, New York Times bestselling author of Pendragon and SYLO.

“There are very few authors about whom I can say, without a doubt, that I will read every single book they ever write. Brandon Sanderson is a member of that club. He's brilliant and has an imagination I've only seen in the likes of Stephen King and J.K. Rowling.” —James Dashner, New York Times bestselling author of The Maze Runner

“Brimming with wit, mystery, and enough ideas to make ten other books jealous, The Rithmatist is boldly entertaining and wildly original. Armedius Academy is the first magic school that really teaches magic--the chalk-based Rithmatics, both a mystic science and a delightful visual art--and I have never had more fun learning anything. The creepy climax had me on the edge of my seat, and the slam-bang finish made me stand up and cheer.” —Dan Wells, author of I Am Not a Serial Killer and Partials

Brandon Sanderson grew up in Lincoln, Nebraska. He lives in Utah with his wife and children and teaches creative writing at Brigham Young University. He is the author of such bestsellers as the Mistborn® trilogy and its sequels, The Alloy of Law, Shadows of Self, and The Bands of Mourning; the Stormlight Archive novels The Way of Kings and Words of Radiance; and other novels, including The Rithmatist and Steelheart. In 2013, he won a Hugo Award for Best Novella for The Emperor's Soul, set in the world of his acclaimed first novel, Elantris. Additionally, he was chosen to complete Robert Jordan's Wheel of Time® sequence.
Loading...
or support indie stores by buying on
(This book is on backorder)