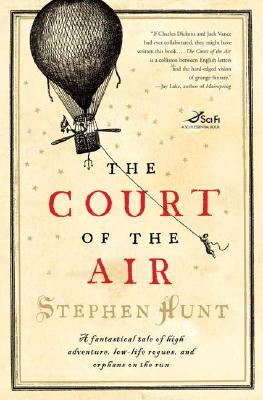 The Court of the Air (Hardcover)

When streetwise Molly Templar witnesses a brutal murder at the brothel she has recently been apprenticed to, her first instinct is to run back to the poorhouse where she grew up. But there she finds her fellow orphans butchered, and it slowly dawns on her that she was the real target of the attack. For Molly is a special little girl, and she carries a secret that marks her out for destruction by enemies of the state.

Oliver Brooks has led a sheltered existence in the backwater home of his merchant uncle. But when he is framed for his only relative's murder he is forced to flee for his life, accompanied by an agent of the mysterious Court of the Air. Chased across the country, Oliver finds himself in the company of thieves, outlaws and spies, and gradually learns more about the secret that has blighted his life.

Soon Molly and Oliver will find themselves battling a grave threat to civilization, an ancient power thought to have been quelled millennia ago. Their enemies are ruthless and myriad, but the two orphans are also aided by indomitable friends in this endlessly inventive tale full of drama, intrigue, and adventure.

The Court of the Air is a rollicking adventure set in a fantastical Dickensian clockwork universe that will appeal to fans of Susanna Clarke and Philip Pullman.

Stephen Hunt is currently on the management, technical, and editorial boards for SFcrowsnest.com, the science fiction and fantasy web site which is currently Google PageRanked(TM) as the Internet's second most popular science fiction site. "The Court of the Air" is his second novel. He resides in London.

Praise For The Court of the Air…

Praise for The Court of the Air
“An inventive, ambitious work, full of wonders and marvels.”--The London Times

“The Court of the Air is a genuinely engaging read, which has believable characters in a fantastic setting.”--The Bookseller