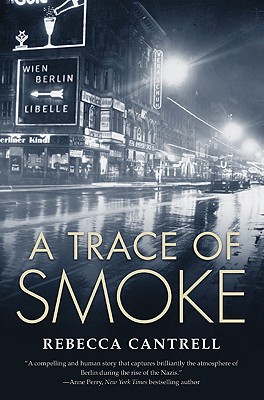 A Trace of Smoke (Hardcover)

Even though hardened crime reporter Hannah Vogel knows all too well how tough it is to survive in 1931 Berlin, she is devastated when she sees a photograph of her brother’s body posted in the Hall of the Unnamed Dead. Ernst, a cross-dressing lounge singer at a seedy nightclub, had many secrets, a never-ending list of lovers, and plenty of opportunities to get into trouble.

Hannah delves into the city’s dark underbelly to flush out his murderer, but the late night arrival of a five-year-old orphan on her doorstep complicates matters. The endearing Anton claims that Hannah is his mother… and that her dead brother Ernst is his father.

As her investigations into Ernst’s murder and Anton's parentage uncover political intrigue and sex scandals in the top ranks of the rising Nazi party, Hannah fears not only for her own life, but for that of a small boy who has come to call her “mother.”

REBECCA CANTRELL majored in German, Creative Writing, and History at the Freie Universitaet of Berlin and Carnegie Mellon University. She currently lives in Hawaii with her husband and son. "A Trace of Smoke" is her first novel.

Praise For A Trace of Smoke…

“Bold narrator and chilling historical setting...an unusually vivid context, [lets] Hannah report on the decadence of her world without losing her life –or her mind.”—The New York Times Book Review

“A gritty realistic portrayal of 1930s Berlin…keeping the suspense high, Cantrell does an excellent job of projecting the fear of the time through her characters. Strongly recommended.”—Library Journal (starred)

“[A] haunting debut novel….evocative, compassionate, and compelling.”—Kirkus Reviews (starred) “Cantrell nails both the ‘life is a cabaret’ atmosphere and the desperation floating inside the champagne bubbles… a promising debut.”--Booklist

“Set in 1931 Berlin, Cantrell’s scrupulously researched debut tolls a somber dirge for Weimar Germany in its last days…this unforgettable novel, which can be as painful to read as the history it foreshadows, builds to an appropriately bittersweet ending.”--Publishers Weekly (starred review)

“A compelling and human story that captures brilliantly the atmosphere of Berlin during the rise of the Nazis.”—Anne Perry, New York Times bestselling author of We Shall Not Sleep

"Evocative and hauntingly crafted, Rebecca Cantrell's debut mystery A Trace of Smoke is a treasure of suspense, romance, and murder. Her ability to spin history into a visceral reality is done with the artistry of a master storyteller. Truly a stunning start to a long career."--James Rollins, New York Times bestseller of The Judas Strain "Make room on your bookshelf for a talented new novelist named Rebecca Cantrell. In A Trace of Smoke, she delivers a historical mystery that works on every level. It's a riveting page-turner. It's an insightful study of a young woman in peril. It's a unerringly accurate vision of a society slipping steadily toward madness. And it's written with a sense of clarity, pace, and attention to detail that tells you this author is going to be writing terrific stories for a long time. So don't miss her debut."--William Martin, New York Times bestselling author of Back Bay and The Lost Constitution

“Step into the fun house world of 1931 Berlin where no one and nothing is what it seems…. A Trace of Smoke is compulsive reading with all the juiciness of the tawdry world of Cabaret but told with keen insight to the historical criminality taking place.”--Sara Colleton, executive producer of Dexter and The Painted Veil

"Moving through the Berlin of 1931, with the monstrosity of the next decade stirring beneath the streets, Rebecca Cantrell's characters illustrate the very human desire to cling to innocence and joy, to do right no matter the cost, to shelter light amidst growing darkness.  Both personal and historical, A Trace of Smoke clings to the mind."--Laurie R. King, New York Times bestselling author of The Game
or
Not Currently Available for Direct Purchase
Copyright © 2020 American Booksellers Association