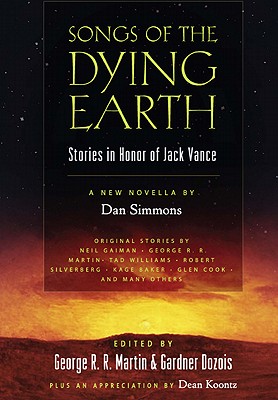 Songs of the Dying Earth (Hardcover)

“Jack Vance's masterpiece, The Dying Earth, has inspired dozens of science fiction and fantasy authors. In Songs of the Dying Earth, Neil Gaiman, Dan Simmons, George R.R. Martin, and others take up the challenge to match Vance's vivid worlds and alien cultures as our sun burns red. A wonderful chance to read today's best science fiction and fantasy authors and to rediscover (or discover) a true master of the genre.”
— John Wenger, Kazoo Books, Kalamazoo, MI
View the List

To honor the magnificent career of Jack Vance, one unparalleled in achievement and impact, George R.R. Martin and Gardner Dozois, with the full cooperation of Vance, his family, and his agents, have created a Jack Vance tribute anthology: Songs of the Dying Earth. The best of today's fantasy writers to return to the unique and evocative milieu of The Dying Earth, from which they and so many others have drawn so much inspiration, to create their own brand-new adventures in the world of Jack Vance’s greatest novel.

Half a century ago, Jack Vance created the world of the Dying Earth, and fantasy has never been the same. Now, for the first time ever, Jack has agreed to open this bizarre and darkly beautiful world to other fantasists, to play in as their very own. To say that other fantasy writers are excited by this prospect is a gross understatement; one has told us that he'd crawl through broken glass for the chance to write for the anthology, another that he'd gladly give up his right arm for the privilege. That's the kind of regard in which Jack Vance and The Dying Earth are held by generations of his peers.

George R.R. Martin is the author of the acclaimed, internationally bestselling fantasy series A Song of Ice and Fire, adapted into the hit HBO series Game of Thrones. He is also the editor and contributor to the Wild Cards series, including the novels "Suicide Kings" and "Fort Freak," among other bestsellers. He has won multiple science fiction and fantasy awards, including four Hugos, two Nebulas, six Locus Awards, the Bram Stoker, the World Fantasy Award, the Daedelus, the Balrog, and the Daikon (the Japanese Hugo). Martin has been writing ever since he was a child, when he sold monster stories to neighborhood children for pennies, and then in high school he wrote fiction for comic fanzines. His first professional sale was to "Galaxy" magazine, when he was 21. He has been a full-time writer since 1979. Martin has bachelor's and master's degrees in journalism from Northwestern University. He lives in Santa Fe, New Mexico. Gardner Dozois, one of the most acclaimed editors in science-fiction, has won the Hugo Award for Best Editor 15 times. He was the editor of "Asimov's Science Fiction Magazine" for 20 years. He is the editor of the "Year's Best Science Fiction" anthologies and co-editor of the "Warrior" anthologies and many others. As a writer, he twice won the Nebula Award for best short story. He lives in Philadelphia, Pennsylvania.

Praise For Songs of the Dying Earth…

"Of the many novels written by sf Grandmaster Vance, his 'Dying Earth' series remains the most popular and most memorable of his oeuvre. Now top sf and fantasy authors… have contributed stories and reminiscences to this mammoth collection of tales set in that unforgettable universe...the 23 stories not only capture the unique feel of Vance's dying universe but stand individually as one of the strongest gatherings of writers to pay homage to one of their own. This is highly recommended."--Library Journal (starred review)