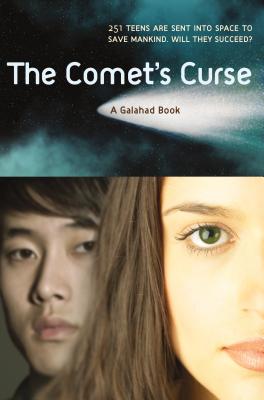 “When a comet's tail swishes through earth's atmosphere dooming all of its inhabitants, the survival of the human race is left up to 251 teenagers. As they embark on a five year space journey, the young people encounter not only technical challenges but problems of the heart and mind. Completely engaging.”
— Anne Holman, The King's English, Salt Lake City, UT
View the List

In the gripping start to this young adult science fiction adventure series by popular Colorado radio host Dom Testa, the teenage crew of the starship Galahad must find a new home for humanity among the stars--if they fail, it will be the end of the human race....

When the tail of the comet Bhaktul flicks through the Earth's atmosphere, deadly particles are left in its wake. Suddenly, mankind is confronted with a virus that devastates the adult population. Only those under the age of eighteen seem to be immune. Desperate to save humanity, a renowned scientist proposes a bold plan: to create a ship that will carry a crew of 251 teenagers to a home in a distant solar system. Two years later, the Galahad and its crew—none over the age of sixteen—is launched.

Two years of training have prepared the crew for the challenges of space travel. But soon after departing Earth, they discover that a saboteur is hiding on the Galahad! Faced with escalating acts of vandalism and terrorized by threatening messages, sixteen-year-old Triana Martell and her council soon realize that the stowaway will do anything to ensure that the Galahad never reaches its destination. The teens must find a way to neutralize their enemy. For if their mission fails, it will mean the end of the human race….

DOM TESTA, of Denver, Colorado, has been a radio show host since 1977, and currently is a co-host of the popular "Dom and Jane Show" on Mix 100 in Denver. A strong advocate of literacy programs for children, he regularly visits Colorado schools. Dom began the Big Brain Club to encourage students to overcome the peer pressure that often prevents them from achieving their true potential. He is the author of the Galahad series of young adult novels, beginning with The Comet's Curse.

Praise For The Comet's Curse: A Galahad Book…

“Grabs readers' attention with the very first page and never lets go. Both a mystery and an adventure, combining a solid cast of characters with humor, pathos, growing pains and just a hint of romance, this opener bodes well for the remainder of the series.” —Kirkus Reviews

“Sci-fi fans will enjoy Testa's spare Asimovian plot, but even those leery of the genre will appreciate how each chapter alternates to the past to further flesh out our protagonists. Stealing the show is the Galahad's mischievous central computer, Roc, who speaks directly to the readers as he acts as a Greek chorus.” —Booklist