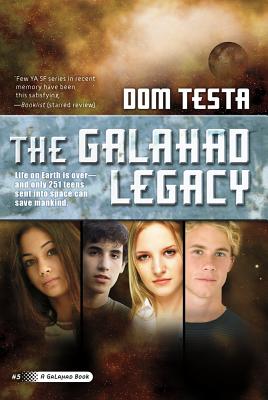 Council leader Triana Martell has returned from her journey through the mysterious wormhole, but she isn't alone. She is accompanied by the ambassador of an alien race the Dollovit.

While the Council and crew of Galahad struggle to come to terms with the existence of the Dollovit, the ship begins to flounder. The radiation shields threaten to fail, damaged by the appearance of multiple wormholes. The Dollovit have a proposal for the crew: an offer of assistance that could be their only hope for survival. But their offer comes with an astronomical price. Beset with doubts and surrounded by danger, can Triana and her crew find a way to reach their destination a new home for the human race?


Praise For The Galahad Legacy…

“The most satisfying entry yet. It’s a five-year space mission, so at this rate, Testa will write 22.7 more volumes. Excellent.”  —Booklist on The Cassini Code

“Grabs readers’ attention with the very first page and never lets go… Both a mystery and an adventure, combining a solid cast of characters with humor, pathos, growing pains, and just a hint of romance, this opener bodes well for the remainder of the series.”
—Kirkus Reviews on The Comet’s Curse

“Part space opera, part mystery, the story draws readers in from the beginning with well-placed hooks, plenty of suspense, and a strong premise."  —School Library Journal on The Comet’s Curse

“Starting with The Comet’s Curse (2009), Testa has published six books in the Galahad series in just four years, and this grand finale makes one appreciate all the more the accomplishments of that colossal effort. What began as a fairly straightforward tale of 251 teens shot into space to escape a ravaging disease on Earth became a deeper, broader, scarier, and more intellectually stimulating journey with every book.… Beth Revis’ similar Across the Universe (2011) is the one on the bestseller lists, but in truth few YA SF series in recent memory have been this satisfying. Whatever you do, don’t start here: the Galahad series is a single, unified story arc, and this powerful conclusion proves how deftly Testa planted his seeds of destruction and salvation along the way.”—Booklist, Starred review