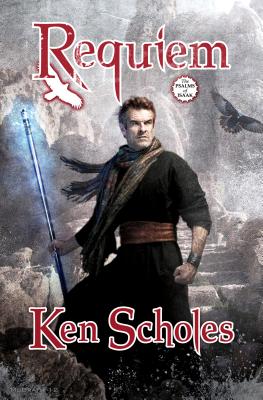 Ken Scholes's debut novel, "Lamentation," was an event in fantasy. Heralded as a "mesmerizing debut novel" by "Publishers Weekly," and a "vividly imagined SF-fantasy hybrid set in a distant, postapocalyptic future" by "Booklist," the series gained many fans. It was followed by "Canticle "and "Antiphon." Now comes the fourth book in The Psalms of Isaak, "Requiem."

Who is the Crimson Empress, and what does her conquest of the Named Lands really mean? Who holds the keys to the Moon Wizard's Tower?

The plots within plots are expanding as the characters seek their way out of the maze of intrigue. The world is expanding as they discover lands beyond their previous carefully controlled knowledge. Hidden truths reveal even deeper truths, and nothing is as it seemed to be.

“A diverse cast of dynamic characters, a tantalizingly labyrinthine mystery, a world full of wonders, and powerful symbolism and imagery power this seamless merging of epic fantasy and science fiction.”
—Publishers Weekly, starred review, on Antiphon


“Not only is Scholes a capable world-builder, he ably handles the tough task of keeping the series momentum going, intensifying the mystery so deftly that even if readers can't foresee where the story's going, it's clear that the author knows exactly what he's doing.”
—Kirkus Reviews, starred review on Canticle

KEN SCHOLES is the author of the acclaimed series The Psalms of Isaac, which comprises Lamentation, Canticle, Antiphon, and this new novel. He lives near Portland, Oregon, with his wife, journalist Jen West Scholes, and their three-year-old twin daughters.
Loading...
or
Not Currently Available for Direct Purchase