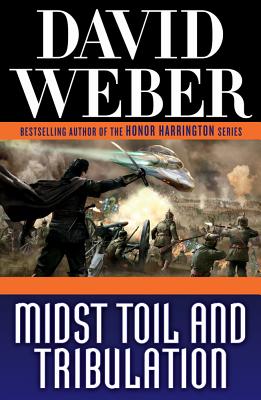 David Weber is a science fiction phenomenon and the author of the Safehold series, including By Schism Rent Asunder, By Heresies Distressed and A Mighty Fortress. His popular Honor Harrington and Honorverse novels-including Mission of Honor, At All Costs, and Torch of Freedom-are New York Times bestsellers and can't come out fast enough for his devoted readers. His other top-selling science fiction novels include Out of the Dark, the Dahak books and the Multiverse books, written with Linda Evans. He has also created an epic SF adventure series in collaboration with John Ringo, including We Few. His novels have regularly been Main Selections of the Science Fiction Book Club. Weber has a bachelor's degree from Warren Wilson College, and attended graduate school in history at Appalachian State University. He lives in South Carolina.

Praise For Midst Toil and Tribulation…

"A brillant new saga... Its focus remains on the people who embody the strengths and weaknesses of a flawed but ever hopeful humanity. Highly recommended"
—Library Journal, starred review on By Schism Rent Asunder

“A superb cast of characters and plenty of action…. This fine book gives new luster to Weber’s reputation and new pleasure to his fans.”
—Booklist, starred review, on By Schism Rent Asunder

"Weber brings the political maneuvering, past and future technologies, and vigorous protagonists together for a cohesive, engrossing whole."—Publishers Weekly, starred review, on Off Armageddon Reef
or
Not Currently Available for Direct Purchase
Copyright © 2020 American Booksellers Association