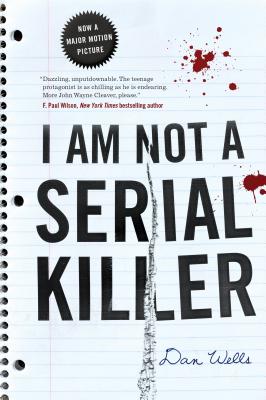 I Am Not A Serial Killer

He’s spent his life doing his best not to live up to his potential.

He’s obsessed with serial killers, but really doesn’t want to become one. So for his own sake, and the safety of those around him, he lives by rigid rules he’s written for himself, practicing normal life as if it were a private religion that could save him from damnation.

Dead bodies are normal to John. He likes them, actually. They don’t demand or expect the empathy he’s unable to offer. Perhaps that’s what gives him the objectivity to recognize that there’s something different about the body the police have just found behind the Wash-n-Dry Laundromat---and to appreciate what that difference means.

Now, for the first time, John has to confront a danger outside himself, a threat he can’t control, a menace to everything and everyone he would love, if only he could.

Dan Wells’s debut novel is the first volume of a trilogy that will keep you awake and then haunt your dreams.

Praise For I Am Not A Serial Killer…

“This dazzling, un-put-downable debut novel proves beyond a doubt that Dan Wells has the gift. His teenage protagonist is as chilling as he is endearing. More John Wayne Cleaver, please.”---F. Paul Wilson, New York Times bestselling author

“The beauty of the prose, mixed with the depth of characterization, gives the haunting, first person narrative a human touch. Regardless of your age or your genre preferences, you will find this story both profound and enthralling.”---Brandon Sanderson, New York Times bestselling author

Dan Wells is the author of "Mr. Monster" and "I Don't Want to Kill You." He lives in Orem, Utah, with his wife, Dawn, and four young children.
Loading...
or
Not Currently Available for Direct Purchase