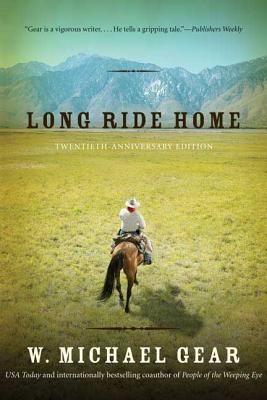 There is a reason Long Ride Home has remained in print for twenty years. The novel is a classic. The gunman has become a romanticized American icon, but Gear dares to take us inside his gunfighter's troubled soul: that of a man teetering between destruction and salvation.

Theo Belk is the quintessential gunfighter: rootless, ruthless, and deadly. In the fierce and lawless Western frontier of 1874 these traits were what was needed to stay alive. Haunted by the ghosts of the men he's killed, there is one man he has set out to destroy...Louis Gasceaux, the man who murdered his parents while a younger Theo watched. But the trail Theo's following is long and bloody...and Louis always seems to stay a few steps ahead.

This is how it was--from gritty buffalo and gold camps to brawling, building towns like Denver, Cheyenne, and Dodge City, populated with ambitious dreamers, deluded fools, and pragmatic women.

“As a warning to those looking for the Hollywood stereotyped hero, he won't be found in Long Ride Home. This isn't your usual horse opera tale. It's a novel of the post-Civil War frontier by a man who obviously knows a lot about the subject. And as for the hero, Theo Belk is as tough as a boiled owl and sometimes just as unsavory. Like a lot of real people who have a problem trying to figure out the difference between good and evil.” —Douglas C. Jones, author of The Court Martial of George Armstrong Custer

“Gear offers complex psychological insights into the motivations of the guy in the white hat…it proves that it is still possible to find real dramatic fiction in the western setting.” —Rave Reviews on Long Ride Home

“Gear writes superbly, rolling prose with flair, confidence, wit, an ear for sound, and an eye for details…His characters and their utterances are striking. And he has another gift: the ability to entertain his readers as he educates them.” —Rocky Mountain News

“A novel of defiance and raw emotion: the vivid portrait of a man locked in violent struggle with himself and the lawless frontier.” —Earl Murray, author of South of Eden on Long Ride Home

W. Michael Gear, who holds a master's degree in archaeology, has worked as a professional archaeologist since 1978. He is currently principal investigator for Wind River Archaeological Consultants. With his wife, Kathleen O’Neal Gear, he has written the international and USA Today bestselling North America's Forgotten Past Series (including People of the Songtrail, People of the Morning Star, Sun Born, Moon Hunt, among others); and Anasazi Mystery Series.
Loading...
or
Not Currently Available for Direct Purchase