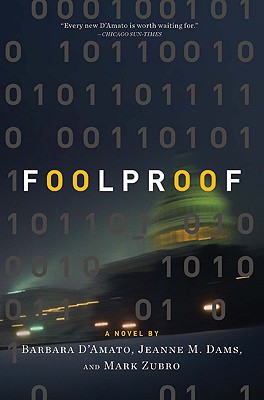 The morning of 9/11 Brenda Grant and Daniel Henderson met for coffee before going to their software firm in the World Trade Center. That casual act saved them from the Twin Towers' collapse, even as their friends and Brenda's fiance were killed and their company obliterated.

Founding their own software security firm, they never forgot that morning of horror. Grant and Henderson then establish a clandestine division inside their company committed to covertly tracking down global terrorists. In a search involving Washington DC, Egypt, Italy and Turkey, they expose a plot to hijack a US presidential election, rig voting machines, and topple democracies worldwide.

"Foolproof" is a global thriller in the tradition of Tess Gerritson, Catherine Coulter, and Linda Howard.

Winner of the Mary Higgins Clark Award winner, BARBARA D'AMATO is the past president of Mystery Writers of America and Sisters in Crime International, winner of the Carl Sandburg Award for Excellence in Fiction and other major awards for crime fiction. MARK RICHARD ZUBRO is author of numerous mysteries in two long-running series, the Lambda Award winning Tom & Scott series and the Paul Turner novels. He is a high school teacher and lives in Mokena, Illinois. JEANNE M. DAMS is an Indiana native. Her first Dorothy Martin mystery, "The Body in the Transept," won the Agatha Award as Best First Mystery. A retired teacher, she has degrees from Perdue and Notre Dame, and lives in South Bend, Indiana.
or
Not Currently Available for Direct Purchase
Copyright © 2020 American Booksellers Association