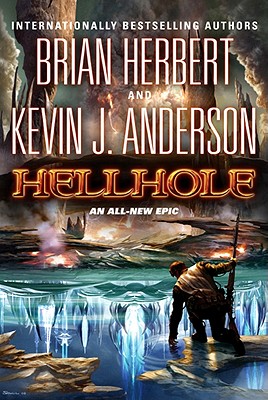 Only the most desperate colonists dare to make a new home on Hellhole. Reeling from a recent asteroid impact, tortured with horrific storms, tornadoes, hurricanes, earthquakes, and churning volcanic eruptions, the planet is a dumping ground for undesirables, misfits, and charlatans but also a haven for dreamers and independent pioneers.

Against all odds, an exiled general named Adolphus has turned Hellhole into a place of real opportunity for the desperate colonists who call the planet their home. While the colonists are hard at work developing the planet, General Adolphus secretly builds alliances with the leaders of the other Deep Zone worlds, forming a clandestine coalition against the tyrannical, fossilized government responsible for their exile.

“Filling in the gaps between the late Frank Herbert’s classic Dune and its sequels Dune Messiah and Children of Dune…this sequel to Paul of Dune is an important addition to the Dune chronology and will be in demand by Herbert fans.”
—Library Journal, starred review on The Winds of Dune