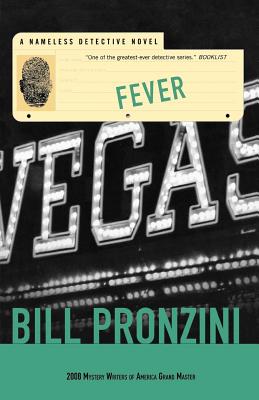 Nameless had told Mitchell Krochek that he'd do whatever he could to find his missing wife, Janice. She'd run away before—propelled by a gambling fever that grew ever higher—and Mitch had always taken her back. This time, when Nameless, his partner Tamara, and the agency's chief operative Jake Runyon finally found her in a sleazy San Francisco hotel, she demanded a divorce.

A few days later, a beaten and bloody Janice stumbled into the agency begging to go home. No one is surprised when, soon after her homecoming, she disappears again.

But gambling addiction has a way of twisting things, and the blood on Mitchell and Janice Krochek's kitchen floor was a card off the bottom of the deck.

Janice is missing again, Mitchell is the prime suspect, and as Nameless searches for the truth behind her disappearance, he uncovers a vicious racket that preys on gambling fever victims…

Bill Pronzini's novel, Snowbound, received the Grand Prix de la Littérature Policière as the best crime novel published in France in 1988. A Wasteland of Strangers was nominated for best crime novel of 1997 by both the Mystery Writers of America and the International Crime Writers Association; in addition to six Edgar Award nominations, Pronzini has received three Shamus Awards, two for best novel, and the Lifetime Achievement Award. He lives in northern California with his wife, the crime novelist Marcia Muller.
or support indie stores by buying on
Copyright © 2020 American Booksellers Association