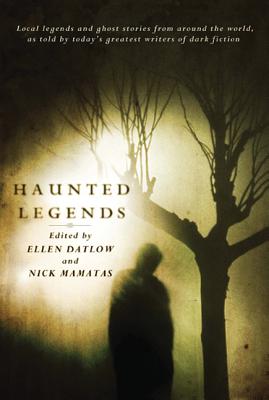 Winner of the 2010 Bram Stoker Award for Best Anthology!

Darkly thrilling, these twenty new ghost stories in Haunted Legends have all the chills and power of traditional ghost stories, but each tale is a unique retelling of an urban legend from the world over.

These twenty nightmares, brought together by two renowned editors of the dark fantastic, are delightful visions sure to send shivers down the spines of horror readers.

Ellen Datlow is a winner of multiple World Fantasy Awards, two Hugo Awards for Best Editor, two Bram Stoker Awards, the International Horror Guild Award, and the Shirley Jackson Award. She was named recipient of the 2007 Karl Edward Wagner Award, given at the British Fantasy Convention for "outstanding contribution to the genre." In 2014, she was named Lifetime Achievement Winner of the World Fantasy Award.   In a career spanning more than twenty-five years, she has been the long-time fiction editor of Omni and more recently the fiction editor of SCIFI.COM. She has edited many successful anthologies, including Blood Is Not Enough, A Whisper of Blood, Alien Sex, Blood and Other Cravings, and, with Terri Windling, Sirens, Queen Victoria's Book of Spells, Snow White, Blood Red and five other titles in their adult Fairy Tales anthology series; The Green Man, The Faery Reel, and The Coyote Road for young adults; and, for younger readers, A Wolf at the Door, Swan Sister, and Troll's Eye View. She also co-edits the Year's Best Fantasy and Horror series. Ellen Datlow lives in Manhattan.

NICK MAMATAS is the author of several novels, including the instant cult classic Move Under Ground and the Lovecraftian crime novel I Am Providence. His short fiction has appeared in Best American Mystery Stories, Year's Best Science Fiction & Fantasy, Tor.com and dozens of other anthologies and magazines. Much of his writing was collected in The People's Republic of Everything.


Praise For Haunted Legends: An Anthology…

“Sure to provide a yardstick by which future ghost fiction will be measured.” —Publishers Weekly (starred review) on Ellen Datlow's The Dark: New Ghost Stories

“What better way to spend a cold winter night than curled in front of the fireplace with a good ghost story or sixteen?” —The Dallas Morning News on Ellen Datlow's The Dark: New Ghost Stories