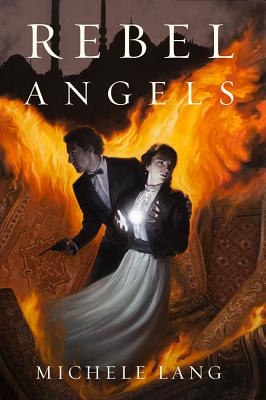 Magda Lazarus has twice come back from the dead to fight the Nazis' devastating conquest of Poland. To prevent the Holocaust her sister has seen in terrible visions, Magda will need the Heaven Sapphire, a gem powerful enough to defeat even the demon Asmodel. With the future of all Europe in the balance, Magda and her husband, the fallen angel Raziel, begin a perilous journey to the Caucasus, the resting place of the fabled stone.

Surrounded by Germans, Russians, and mistrustful Azerbaijani tribesmen, Magda must summon all her magic to withstand the predations of the deadly supernatural foes. But more dangerous yet is the power of the Sapphire itself, which could stop Hitler or destroy Magda.

"Rebel Angels, " the climactic book of Michele Lang's Lady Lazarus trilogy, filled with suspense, magic, and action, will have readers at the edge of their seats until the exciting conclusion.

MICHELE LANG is the author of the historical urban fantasy novel, "Lady Lazarus," and its sequel, "Dark Victory." Like her protagonist, Lang is of Hungarian-Jewish ancestry. She and her family live on the North Shore of Long Island, New York.