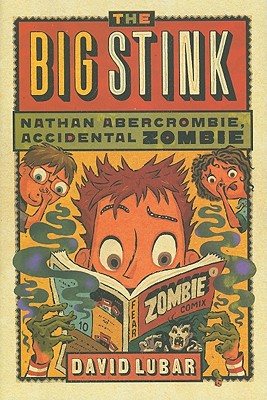 “I figured, being dead, my life would become a lot simpler. I wouldn’t have to take care of myself or worry about stuff like eating the right food. But dead kids have a whole different bundle of problems.”—Nathan Abercrombie

It’s a stinky situation when Nathan’s school, Belgosi Upper Elementary, develops a mold problem and his class is forced to share space with the first graders. Soon the eighth graders show up too, including Rodney the bully’s older and meaner brother, Ridley. Could he be the reason for the stinky, putrid, rotten smell that seems to be following Nathan around? It’s up to Nathan, Abigail, and Mookie to solve the mystery of the big stink before it pollutes the entire town.

Fans of David Lubar’s popular Weenies short story collections, which have sold more than one and a half million copies, are sure to enjoy this fourth hilarious installment of the adventures of Nathan Abercrombie, Accidental Zombie.

David Lubar created a sensation with his debut novel, "Hidden Talents," an ALA Best Book for Young Adults. Thousands of kids and educators across the country have voted "Hidden Talents" onto over twenty state lists. David is also the author of "True Talents," the sequel to "Hidden Talents"; "Flip," an ALA Best Book for Young Adults and a "VOYA" Best Science Fiction, Fantasy and Horror selection; five short story collections: "In the Land of the Lawn Weenies," "Invasion of the Road Weenies," "The Curse of the Campfire Weenies," "The Battle of the Red Hot Pepper Weenies," and "Attack of the Vampire Weenies"; and the Nathan Abercrombie, Accidental Zombie series. Lubar grew up in Morristown, New Jersey, and he has also lived in New Brunswick, Edison, and Piscataway, NJ, and Sacramento, CA. Besides writing, he has also worked as a video game programmer and designer. He now lives in Nazareth, Pennsylvania.

Praise For The Big Stink…

"This is a great choice for reluctant readers and anyone who enjoys humorous stories. Despite being filled with farts and vomit, ultimately it's a sweet story about the importance of friendship, family, and doing the right thing."
--School Library Journal

"Kids will get a chuckle out of Nathan and his friends."
--Children's Literature

“Lubar has a fine time inventing gross-outs, but he also knows how to incorporate believable character motivation and work the heck out of a metaphor. It appears inevitable that a sequel shall rise from the grave.”—Booklist

“The over-the-top narrative will appeal to readers who like their humor twisted, and might even have some wishing that they, too, could be a half-dead zombie.”—Publishers Weekly

“You have to love a writer who can rhyme zombie in his title. Readers of Lubar’s Hidden Talents will enjoy his silly/funny style of storytelling.”—NY Post Entertainment Section