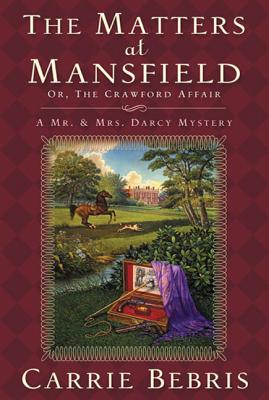 The Matters at Mansfield

Or, The Crawford Affair (Mr. and Mrs. Darcy Mysteries #4)

Following the birth of their first child, Elizabeth and Fitzwilliam Darcy are looking forward to enjoying life at Pemberley, but family commitments draw them away to Mansfield Park. There, the Darcys get involved with marriage arrangements, star-crossed lovers, deceit, mistaken identity, and even murder.

Once again the Darcys take center stage as the Regency era's answer to The Thin Man's Nick and Nora in this delightful series by the 2007 Daphne du Maurier Award-winning author of North by Northanger.


Praise For The Matters at Mansfield: Or, The Crawford Affair (Mr. and Mrs. Darcy Mysteries #4)…

“Bebris has a great feel for both the period and Austen's witty style, making the pages fly by in this absorbing, charming mystery.” —Booklist

“An utter delight . . . every aspect is pitch-perfect.” —RT Book Reviews (Top Pick) on North by Northanger

“Bebris provides another feast for Janeites in . . . this well-told tale.” —Publishers Weekly (starred review) on North by Northanger