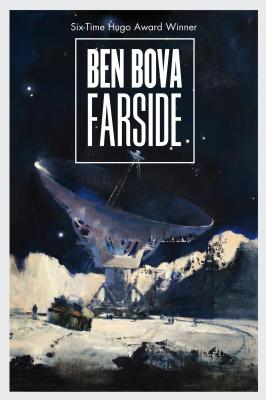 Six-time Hugo-Award winner Ben Bova presents "Farside."
""
Farside, the side of the Moon that never faces Earth, is the ideal location for an astronomical observatory. It is also the setting for a tangled web of politics, personal ambition, love, jealousy, and murder.

Building the Farside observatory is a complex, often dangerous task. On the airless surface of the Moon, under constant bombardment of hard radiation and infalling micrometeoroids, builders must work in cumbersome spacesuits and use robotic machines as much as possible. Breakdowns mechanical and emotional are commonplace. Accidents happen, some of them fatal.

"Bova's latest novel is one of his best, and a classic use of the old sf theme of humanity reaching out for immortality among the stars." "Booklist" (starred review) on "Farside.

“Bova’s latest novel is one of his best, and a classic use of the old sf theme of humanity reaching out for immortality among the stars.”—Booklist (starred review) on Farside

“The sort of gritty, hands-on, you-are-there yarn at which Bova has long excelled.”—Kirkus Reviews on Farside


"With his customary use of scientific facts to augment his flair for storytelling, Bova brings to life another sf adventure about humanity's future in space."—Library Journal on Farside

“Bova’s fans and hard SF lovers should flock to his latest novel.”
—Library Journal on Leviathans of Jupiter

“A quick-paced space adventure.”
—Publishers Weekly on Leviathans of Jupiter

BEN BOVA is a six-time winner of the Hugo Award, a former editor of Analog, former editorial director of Omni, and a past president of both the National Space Society and the Science Fiction Writers of America. Bova is the author of more than a hundred works of science fact and fiction. He lives in Florida.
Loading...
or
Not Currently Available for Direct Purchase